The writers have been hinting at the reveal of John Blackwell for so long, in relation to Cassie’s infusion of dark power, that it was probably inevitable that the eventual arrival of the man would be a disappointment. And sure enough, I found very little interesting about Blackwell. If anything, I was left with the notion that he was as terribly miscast as Cassie.
It doesn’t help that John Blackwell was described as one of the most terribly dangerous dark witches to ever rear his demonic little head, and he comes walking into town like a guy looking for an AA meeting. Completely powerless, his stated intention of protecting Cassie is rendered ludicrous by how easily she overpowers him when the witch hunters send her gunning for him against her will. Sometimes playing against expectation is a good thing, but not in this case. 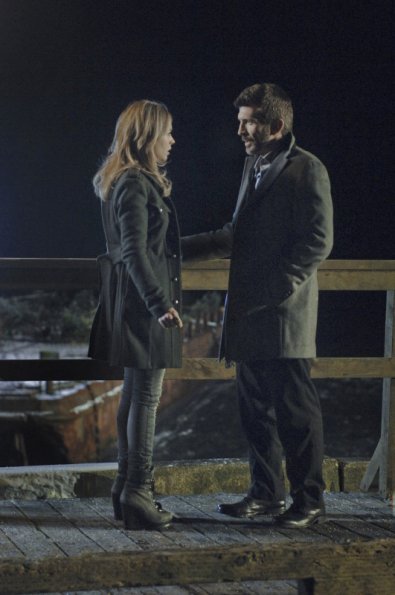 Part of the problem is that the return of Blackwell, in this depowered state, is used as the catalyst for the circle as a whole to work together. It’s great that they do this, but the scene is poorly executed, from the writing down to the direction, so it looks like a bunch of high school students making a video for a class project. I know I always make these comparisons, but when this comes out of the same production house as “The Vampire Diaries”, I expect more.

I’m also not sure where all this business with Lee and Callum is going, but it feels very repetitive. At this point, we’ve got several groups trying to steal the power from the circle, and none of them are particularly distinctive, other than their age. The previous circle wants their power back, the witch hunters want the power gone so they can kill the witch threat, and now there’s a voodoo subculture who wants their mojo. Oh, and Blackwell is probably trying to get the power as well, which is perhaps the most promising direction they could go. Still, it’s all too similar for my taste.

Sports fans are familiar with the notion of “momentum”: teams can get on a streak, within a season or just within a game, where they perform better or worse as their fortunes rise and fall. I feel like “The Secret Circle” is struggling to break the momentum of its mediocrity. We’ve seen great episodes with plenty of potential here and there, but the writers never seem to capitalize on their successes. And this cast needs a consistently strong script to balance their relative weaknesses.