As a geek of TV shows and movies of any kind, Wynonna Earp was different. At first I had no idea what the show was about and did not really understand the story, so I started reading up on the show. It looked badass and so interesting, so I started to watch it without further ado.

The first episode I was scared, but the curiosity of understanding the story drew me to keep watching it.

So, then I started searching for a little bit of background on the cast and crew of the show. When I realized that Emily Andras was the producer, I immediately remembered Lost Girl and that Tim Rozon was in that cast too. I thought the show must be awesome. I also loved it, because I felt like it was going to be show with strong female leads, which became clear when I watched it. 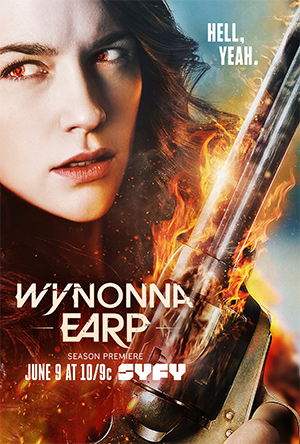 I remember I thought that Wynonna was so cool, a superhero of her town with a special gun that could kill demons.

The other thing that I got a close look at was family, friendship, and relationships in the show, love and hate.

As I followed season one, I got to see beautiful LGBT storytelling, although it was just the beginning of something; at the end of the season there was officially a lesbian relationship on the show. It was shown in a very realistic way: not judging. They just didn’t make a big deal out of it; it was just like any other relationship.

Not long ago, I continued the journey as season two aired. I barely remembered where we stopped at the end of season one, but I couldn't wait to be updated and see what happened next.

We are only a few hours before the season two finale. The female lead of the show (Melanie Scrofano) and the cast and crew have been through so many experiences during filming this season. There were new faces that joined the show, and they had so many ups and downs with their characters. For me, it was like I had to deal with so many things while watching, and it got me excited and took me to emotional places I never experienced before. In many moments it was liberating, funny, and beautiful.

The cast and crew shared their love for the fandom's talents, from art work, to inspiring songs about the show, to letters and poems, and even gifts.

As a viewer, I was able to share some of my thoughts during the season in reviews, and I was blessed to do so.

I am also glad I got to see new faces of actors and actresses that the show presented to me that I wasn’t familiar with. I even went on to see some of Melanie’s, Dominique (Provost-Chalkley)’s, and Katherine Barrell’s work in movies and different shows.

Tonight we will likely have different questions to ask, and maybe some of the answers will be given, but it's not the end of the road yet, before us we still have season three.

You better not miss the final episode of the season tonight. There are only a few hours left until the Wynonna Earp season finale airs on Syfy.
Twitter
BotonSocial por: SocialEmpresa
Category: TV Reviews & Recaps