SciFi Vision | All Reviews | Television Reviews | Are You "Tough Enough?"

Are You "Tough Enough?"

I haven't consistently watched wrestling for quite a few years, but that doesn't mean I've forgotten who the Rattlesnake is. Six-time WWE Champion, "Stone Cold" Steve Austin, is hosting the latest installment of USA Network's WWE Tough Enough, the first since 2004. In this reality series, contestants will compete to become the new WWE superstar. I for one think Austin is a perfect choice, because when talking about being tough enough, Austin is one of the toughest S.O.B.s you'll ever meet. Just ask him, he'll tell you.

We start by meeting our fourteen contestants: Martin Casaus, Matt Capiccioni, Christina Crawford, Michelle Deighton, Rima Fakih, Andy Leavine, Eric Watts, Mickael Zaki, Ariane Andrew, Ryan Howe, AJ Kirsch, Jeremiah Riggs, Luke Robinson, and Ivelisse Velez. There is an interesting mixture of experience and celebrity among the contestants. Some, like Capiccioni and Velez, have wrestled in the independent circuit, while Fakih has no experience and is the reigning Miss USA. 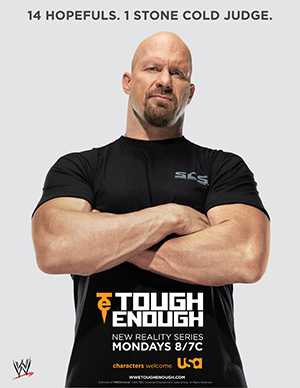 When it comes to reality shows, most are scoffed at, but this is not for the faint of heart. Make no mistake that this is a brutal contest and only the contestant with the most physical prowess, charismatic behavior, and heart will be the victor. Hard work and commitment is where it all starts, and even then, you start at the bottom. The contestants are told right away that being in the WWE isn't just about the performers in the ring; it's about all the people it takes to make the WWE successful. It's about understanding and respecting the people behind the scenes. The contestants are given a taste of that as they don rubber gloves and coveralls and help prepare the arena for the WWE Raw event taking place later that night.

Over the next two days the contestants quickly find out it's not just physical toughness, but mental toughness too, that they will need to survive. Each contestant is given a WWE Championship belt that they will keep until they are eliminated, at which time they will have to give it back. Unlike past Tough Enoughs where there were two winners, this one will only be having one, which makes the competition even more fierce. One by one they will be eliminated until there is only one person left.

Austin is joined by six-time World Champion, Booker T, seven-time Women's Champion, Trish Stratus, and two-time United States Champion, Bill DeMott. It will be the job of these four people to decide which contestant is truly "tought enough."