Surprisingly I don't actually have a lot to say about this one. Abraham Lincoln: Vampire Hunter is certainly a unique book concept, but as a movie simply an exercise in the melodramatic. Rather, I should say a glorious exercise in the melodramatic. As another tid-bit of background about your reviewer, I love melodramas. I find them supremely entertaining, and even sometimes moving. This melodrama leads more towards the prior. 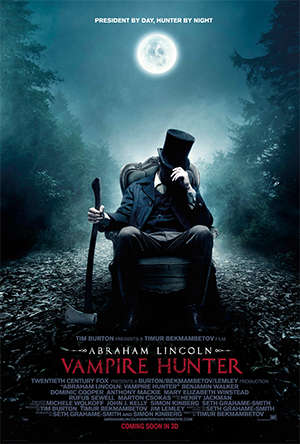 To enjoy this film it will require a lot of suspension of disbelief. Not really on the historical side of things. The film (and I imagine the book that inspired it) does it best to not change Lincoln's historical life, only using the fantastical, fictional events as secret secondary motivations for his political aspirations. No the suspension of disbelief is of the amount of skill as a vampire hunter the film claims Lincoln had. See, the action in the film has a modern mindset, right down to everyone knowing some martial arts, and there being a "car chase fight" at one point. However, at least for me, once I accepted that this was a story about Abraham Lincoln fighting vampires, I found it acceptable to find Lincoln fighting one such demon while on top of a horse stampede. Still, for those of you who just can't let reality go for sake of the fantastic, that does not mean you'll find these scenes enjoyable. Instead, you'll likely find yourself laughing at the ridiculous, over-the-top nature of them rather than finding them exciting. 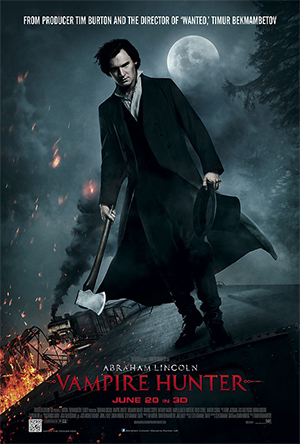 Also, I mentioned before that the film tried its best to tie such elements to the historical events that made up Lincoln's life. In this respect, the movie does attempt to inspire in that it demonizes slavery, though, not in a terribly subtle way. The alternate history has vampires setting themselves up as plantation owners in a grand scheme to use slavery as a never-ending source of easy food. As such, when the Civil War rolls around it is naturally in their best interest to back the Confederacy. Though the way they do this, and how Lincoln comes to counter it, is rather clever, the whole thing leads to the unfortunate oversimplification of the war that grade-schoolers know. The south wanted slaves, and the north said they couldn't have them. I found this oversight only excusable by the fact that the Civil War was not the main setting for the movie, but rather just the set-piece for the climax.

So, should you go see this movie? As my title might indicate, I'd recommend it. If you enjoyed Van Hellsing or Blade Trinity, you'll likely enjoy Abraham Lincoln: Vampire Hunter. If you couldn't enjoy those movies you may want to skip this one, the action is over-the-top, and the concept is absurd. I just find those two things enjoyable.
Twitter
BotonSocial por: SocialEmpresa
Category: Film Reviews