SciFi Vision | All Reviews | Film Reviews | "Prometheus:" It’s a Prequel, But Not That Kind

"Prometheus:" It’s a Prequel, But Not That Kind

Without a doubt Prometheus is a prequel to Alien, but only in classification. See, the Alien series is interesting in that the franchise encompasses multiple genres. Alien was a horror movie set in space, Aliens through Alien Resurrection were action movies in space, the AVP movies were parodies that took themselves seriously with sci-fi back story, but Prometheus is a hard science fiction movie. That is to say, unlike its predecessors it was not meant to scare or to excite, it is meant to inspire thought. I'll tell you right now, if you're going to see it and expecting Aliens, you will be sorely disappointed or bored; however, that's not to say there's not monsters and death, just that those take a back seat. No, this film tries to ask the question, "How you would react if you met your god, and he or she wasn't what you expected?" 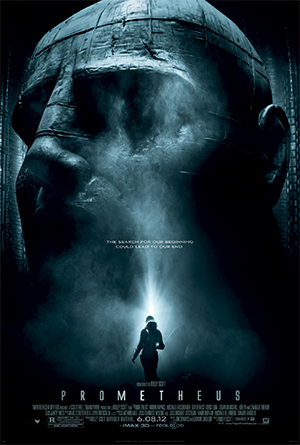 I said "tries" because the film could have done a better job of it. Don't get me wrong, it's a good movie. The hard sci-fi concepts at play are interesting to see, and the expansion of the Alien universe comes as a refreshing change. (The focus is mainly on a different alien race). The movie's weak point in exploring these themes is ultimately its characters. At some point in production this film must have been intended to be another horror entry in the franchise, because our chosen cast of characters is from a horror movie, not a hard science fiction movie. With few exceptions, there's little exploration of motivation, personality, or real character. Instead, just enough sense of personality is provided that the actors fill roles in the audience's minds rather than living people. They may not be cookie cutter archetypes, but they are flat characters.

What's worse for a hard science fiction, they're stupid. When the movie is trying to get you to question your concept of God, it's very distracting when the characters asking the questions perform classic horror movie mistakes. "No, don't touch that!" – "Don't trust him; don't trust him!" – "The worst thing you could do is panic!" It also doesn't help that out of the eighteen or so characters, only three are likable. That being said, Michael Fassbender's performance as the android David is superb. He's definitely the stand-out performance for the film with his portrayal of an unsettling lack of emotion, but still appearing almost human. He would make Lance Henriksen, with his portrayal of the equally creepy android, Bishop from Aliens, proud. 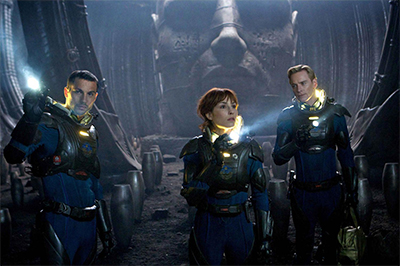 Now, that may sound like a lot of negativity, but remember, I said it was a "good movie." If you enjoy science fiction that is speculative in nature, such as 2001: A Space Odyssey, or Mission to Mars, there is a lot here for you to think about. If you're a fan of the franchise, Prometheus offers a great set-up to the stories that follow it while also bringing new perspective to details that fans long since moved on from. And, if you enjoyed the creepy/bloody monstrosities from the other films there's some of that here too; just remember, it takes a back seat to the speculative theme. I'm just letting those of you who enjoy the hard science fiction themes know that you may find yourself wishing that Weyland Industries sent a different crew.

Go see this one, just keep an open mind, and don't go expecting the same thing as the rest of the franchise.
Twitter
BotonSocial por: SocialEmpresa
Category: Film Reviews