Oh come now, you knew it was mutant cannibals right from the preview, what you want to know is if these mutant cannibals are worth $10 a ticket. Before I talk about the movie though I should share another bit of relevant information about your reviewer's background; I don't like horror movies. Don't get me wrong, gore and scares aren't the problem. It is because most horror movies are very sparse on plot. Far too often I've seen the story in a horror flick boil down to "it's a ghost/vampire/werewolf/demon." Then there's a bunch of people who die followed by a coin toss whether the hero prevails over the evil with his newly acquired love interest or they die in the last scene. There are a few horror movies I like, my favorite of which is John Carpenter's The Thing, and even that can be argued to be more of a monster movie than a horror movie. 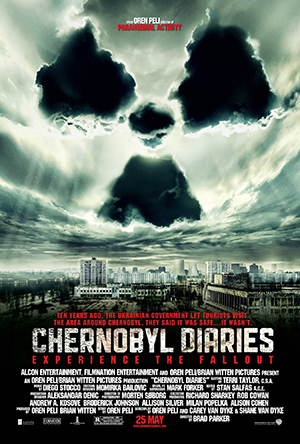 Anyway, Chernobyl Diaries, is anything but The Thing. The story is so thin that even the horror formula I mentioned above can't apply. The plot of the film is essentially the first half hour of Hostel followed with The Hills Have Eyes minus the rapist-hillbilly Deliverance undertones, and you know, the plot. Hell, the last third of the movie is a single chase scene where our victims are picked off one at a time, accompanied by slow motion screams of despair. I wouldn't have a problem with this if the movie put the time into making me care for these characters. Oh, it tries to help me get to know the characters before hand, but the writing stumbling and confused.

This is because, as the marketing could never let us forget, the movie had Oren Peli of Paranormal Activity fame behind it. This was not in the movie's favor. The film emulates a found footage story with "real" (pointless) dialogue, and reactions. There are entire scenes that occur for no reason other than the film is trying to portray a "real" Eastern Europe experience. The camera even attempts to simulate the success Peli and other filmmakers of this cinematographic genre have earned but trying its best to be a shaky cam, (though thankfully not to the point of nausea). 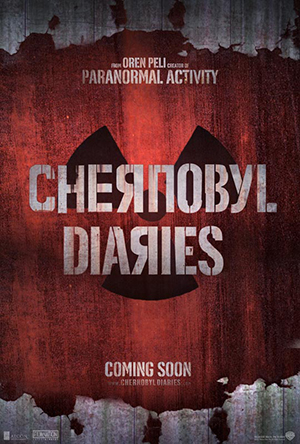 It occurs to me that because of this emulation and the "Diaries" in the title, which mind you appears nowhere in the film, that the film was originally meant to be another found footage horror film, but along the way someone decided not to take the risk. Unfortunately, this leaves the film in this strange middle ground with forced dialogue, and pointless "real" occurrences.

Granted, the film isn't all bad. You can tell that at least someone on the team understood what it meant to scare people. There are some good, if predictable jump scares. Also, to the film's credit, someone understood that monsters are always scarier when you never fully see what they are. The movie leaves the extent of the mutation to the imagination, but gives you enough glimpses to know that there is mutation. That being said, the mutant cannibals are never fully explained. The most we get are the closing scenes with soldiers and found footage dialogue from doctors.

Because I don't condemn movies, this is the part where I associate the film to others to let you know whether it is to your taste or not. This is difficult given the lack of plot and confused cinematographic style. So, I'll cheat by informing you that IMDB told me that people who liked Chernobyl Diaries also liked Piranha 3DD, Cabin Fever, and The Moth Diaries. If you see this one, wait for it to hit the cheap seats.
Twitter
BotonSocial por: SocialEmpresa
Category: Film Reviews
Position: position-22
Style: artstyle outline