Battleship has been receiving a lot of guff from critics since even before it was released. A natural reaction for them I think, given that the previews make it look like the fourth Transformers movie. A series that has polarized movie viewers like none other I've seen. (Since it is partially relevant, and if it's important to you, I enjoy that series. Are they flawless, no, but they are more than enjoyable action flicks.) However, though Battleship may look like Transformers, it is not; it's Independence Day, another big time movie critic punching bag that I enjoy. 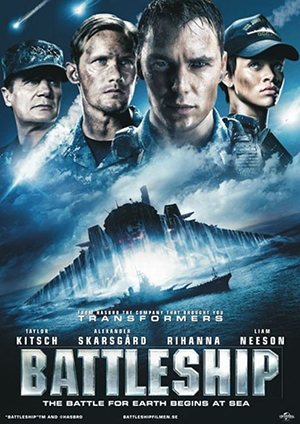 I won't sugar coat things, there are a lot of faults to this one. The plot is thin, the characters (say two) are stereotypical, the dialogue forced, and the first twenty minutes of character set-up is painful to watch.  Further, Battleship attempts to line the movie with the same levity that we've been seeing in blockbusters this year. Unfortunately, most of the time it ends up coming across as 90's campy, and not the good kinds of campy that are over the top or clever one-liners, but the bad kind that just falls flat. I think the film made me chuckle once.

That being said, Battleship is not a bad movie by any means. It has some things going in its favor. For one, as mentioned above, Battleship looks like Transformers. The aliens and all the carnage wrought on and by them are rendered in all the flashy glory an action fan could ask for. Everything is right on par with anything Michael Bay could muster. Also, those stereotypes I mentioned are archetypical military characters. The screw-up lieutenant with lots of potential who's dating the admiral's daughter; the tougher-than-any-man, female soldier; and the successful, disappointed older brother are all present. There's a reason why we see these characters so often in military fiction, they're relatable. Most of us have felt intimidated by our significant others' family, didn't fit into a societal role assigned to us, and seen someone we care about make terrible mistakes. If you've seen and enjoyed these characters before, you'll enjoy them now. 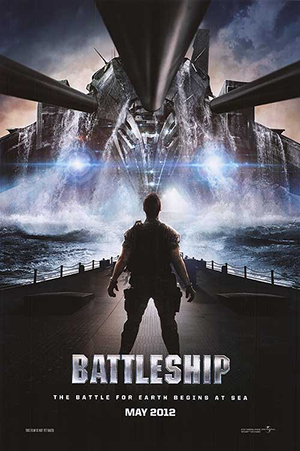 Speaking of military fiction, both the allied naval force, and the aliens are well thought out. Both sides are clever, and use (mostly) sound, military strategy. The aliens aren't monsters from space that indiscriminately kill any puny human without thinking. They focus of the same military targets our scouting troops would: infrastructure, communications, and military reserves, all while sparing innocent life. There's even a very brief point where one of the aliens spares a human that's obviously working against them, raising the notion there might be dissention in the "faceless enemy." Overall, the aliens act like people, which is refreshing to see in an alien invasion story. On the other side of things, the naval forces manage to scrounge up a grab-bag of clever strategies to work around obviously superior enemies, including a creating a grid to track the enemy when sonar fails to work on the alien craft. (I see what you did there Battleship).

On top of thought out military behavior, the movie also sports a very cool sequence where the heroes need to utilize a WWII battleship and have to rely on the retired veterans who staff the museum piece in order to operate it. I've heard some criticize this and similar movies for glorifying the military. As a bit more of relevant background, three generations of my family served in three branches of the military so that I could be a civilian that can go to see movies and write up whatever I like about them on the internet. It is not, nor will it ever be a negative aspect of a movie to pay respect to the men and women in our armed forces. In this regard, the sequence I described above with the WWII veterans inspires a good deal of respect.

So, should you go see Battleship? Well, it's true that it's not perfect, but it does have plenty to offer. If you enjoyed the Transformers movies or Independence Day, you'll enjoy Battleship. If you did not, best to save your money and go see Avengers for the third time.
Twitter
BotonSocial por: SocialEmpresa
Category: Film Reviews