Every once in a long while a movie comes along that is of such quality that you feel the need to applaud when the credits roll; a movie that to share the details of which would feel like a crime, because you would be robbing the potential viewer of the amazement that could be had. Cabin in the Woods is one of those movies. Given the state of this movie, and my wish not to be criminal, what will be discussed hereafter will reveal no story from the movie that has not already been revealed in the trailers. Trust me; it is that sort of movie. 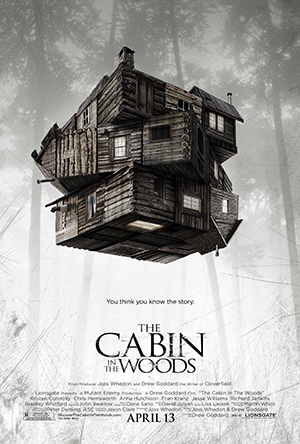 From the first seconds of film through the credits, it is apparent that Director/Writer Drew Goddard of Lost fame, and his cohort Joss Whedon, the man behind the story of the upcoming Avengers, knew exactly what they were doing. Cabin in the Woods from its earliest reveal showed itself to be an atypical horror movie. To the point that once you actually see it, you're not sure that you can classify it as a horror movie anymore. The set-up is age old for anyone who's seen a handful of flicks from the genre. Several college students, the jock, the hot girl, the pothead, the smart guy, and the shy but still hot girl, all take a trip out to a secluded location for a weekend of drinking, sex, and imminent death.

Yet, halfway through the trailers the first of many twists from the movie is revealed. There's something artificial going on here. You see men in some type control room, with monitors watching the students every move. They manipulate large panels of flashing buttons as cookie-cutter movie psychopaths terrorize our young victims. Further, a hawk can be seen crashing into an invisible wall, revealing a flashing hex grid separating our secluded location from the rest of the world. These reveals lead many to believe that Cabin in the Woods is simply a Truman Show meets Friday the 13th. Though this is true to an extent, it is as apt of a summary of the movie as calling Star Wars, Lord of the Rings in space.

This first twist is central to the plot of the movie, revealed early on and consistent through the climax; however, it is but one of many that defines the true glory the film. These film makers know exactly what audiences are thinking going into the film, and play with our expectations from scene to scene. I mentioned before that the genre of this film is horror. That was more of a suggestion than a definitive label, because by the end of the film you've seen so many changes of narrative perspective that it truly breaks beyond the genre. 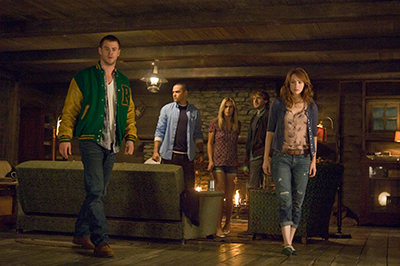 Those of you who aren't fans of horror should be warned however, since the elements of its seeming genre do come with it. There is nudity, there is foul language, and there is gore. It should also be noted that accompanying these, there is a great degree of levity to be had throughout as well. Just when things ramp up to pulse pounding intensity or mind wracking mystique the film hits you with a relieving dose of something unexpected.