Most fans know Taylor Lautner as the sexy teen werewolf in the Twilight Saga, but this summer he sheds his fur to take on a bigger role as the lead in the film Abduction. Thursday night twenty theaters around the country held a special screening of the film, along with a live stream of the Hollywood premiere. One of these cities was Pittsburgh, Pennsylvania. 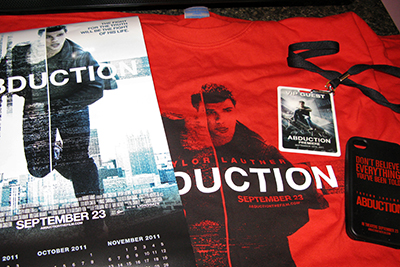 The night started with the premiere as fans got to watch the stars live on the red carpet as well as send in questions for the stars on Twitter and Facebook. In attendance were those who worked behind the scenes, including the director, John Singleton, as well as the stars such as Lautner, Lily Collins, Alfred Molina, Sigourney Weaver, Jason Isaacs, and more.

Fans got to hear the interviews and get some of their questions answered. The celebrities also gave many shoutouts to the cities that were watching the premiere live, especially Pittsburgh where the movie was filmed.

Abduction follows the character Nathan, who after starting a school project finds his face on a missing person's website, and makes the mistake of contacting someone.

Nathan's family is killed as he escapes with his childhood friend and current crush, Karen (Lily Collins). They race to no be found, not knowing who they can really trust. 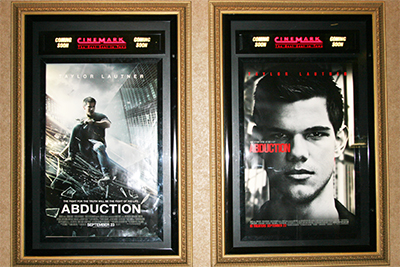 The film was not quite what I was expecting after seeing Lautner in the Twilight Saga. This was not a teen movie at all, but an enjoyable edge-of-your-seat thrill ride where the action never stops. Lautner has definitely grown as an actor since his past films, though he still had his prerequisite shirtless scene.

The trailer of the movie, really does not do it justice, because it is so much more. I think part of the problem is they are trying not to spoil what is really going on in the film, even though it is apparent very early on in the movie. However, if you like action films, you will like this movie.

The script was well written. Although you may have to suspend disbelief a bit at the ease at which Nathan makes decisions on what to do, it was nice for a change to see an intelligent character. Usually I find myself yelling at the screen because characters notoriously tend to make such bad decisions in films.

I also didn't expect at first to really buy the romance between Lautner's and Collins's characters, but I found that I did, and enjoyed their moments together. 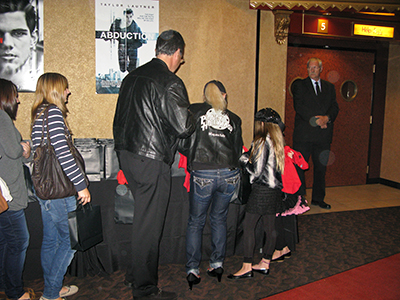 The rest of the cast also gave great performances. It was great to see Isaacs on screen again, and his character I thought was a lot of fun. I think the best part was seeing him and Lautner fight; they both got in some great punches. It was a slightly comical scene and worked really well.

Weaver was great as expected as well, though I would have liked to have seen her get more screen time, as I would have Isaacs.

Being from Pennsylvania, I have to take a moment to talk about the locations as well. I think the setting did work out well for the story, but it was also great to see Pittsburgh on the screen. The climax of the film took place at PNC Park during an actual Pirates game, which was great. I also of course loved the actors talking about it during the premiere. It really made a great backdrop.

Abduction moved along really quickly, in my opinion. There was a lot of action, though unlike some similar type of films, there was still some nice slower moments and time for character development. The two best action sequences were probably the train ride and the finale of the film. The stunts were executed brilliantly throughout the movie as well. 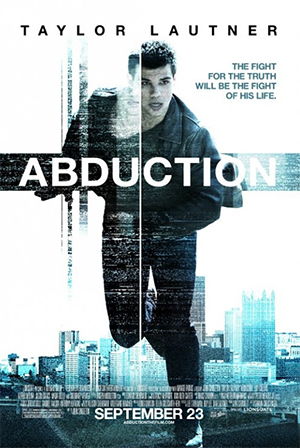 Abduction itself was very enjoyable, though I do believe that airing the premiere before the movie added to the appeal, as it also included some behind the scene looks. Though all in all for a special event for fans that was thirty dollars a person, I'm not sure that it was worth the fee. First and foremost, especially because this premiere took place in Pittsburgh where the movie was filmed, I expected some kind of "party" or giveaways, or even just people encouraged to hang around in the lobby like tends to happen at other Pittsburgh openings. At this opening, the only thing there was, besides picking up your bag of goodies (t-shirt, badge and lanyard, cellphone case, and locker poster) there was a very small "red carpet" going into the room the movie played and a standup display of Lautner at the end you could take photos with. I think they should have at least included a regular ticket option if you didn't want the VIP fan pack, especially considering the premiere you could watch streamed online for free.

The other thing I had a problem with was a catch-22. I really liked the aspect that you were expected to tweet and post during the premiere; it made it fun. What wasn't fun was all the young girls who not only talked through all of this, but through half of the movie as well, which may have been because they were amped up beforehand. I do, however, very much like the idea of having an early preview for fans and getting to see the live premiere and being able to participate through social media.

All in all the trip was worth the experience and Abduction was a great fall action flick.