Syfy premieres the highly anticipated fourth installment of its hit global film franchise from The Asylum this weekend, Sharknado: The 4th Awakens.

The film takes place five years after the events in Sharknado 3: Oh Hell No! The sharknados have been kept at bay thanks to billionaire CEO Aston Reynolds (Tommy Davidson), who's company, Astro-X, has found a way to stabilize the atmosphere and prevent the sharknados.

No one, however, is safe when the storms return and it's once again up to shark-killing hero Fin Shepard (Ian Ziering) to save them all, as more and more 'nados pop up in Las Vegas and beyond, each different and wackier than the next. 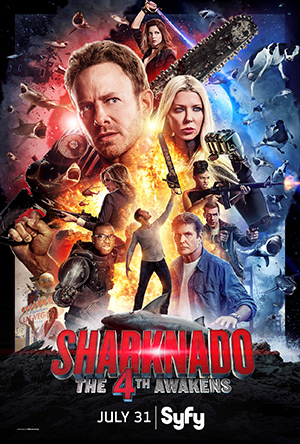 Tara Reid reprises her role as April Wexler to reveal the results of the social media vote of the #AprilLives or #AprilDies campaign. Also returning are David Hasselhoff as Gil Shepard and Ryan Newman as Claudia Shepard.

As always there are new fun cast editions like Gary Busey as April's father, and tons of cameos, such as Gena Lee Nolin, David Faustino, Dr. Drew Pinsky, and Wayne Newton, just to name a few. And as always, don't forget to keep an eye out for director Anthony C. Ferrante.

The movie is really entertaining; it's not even ten minutes into the film when the action starts, and it doesn't stop. Actually, the movie is pretty much all zany action, one scene after another, without much story in between, but for this type of film it works; fans aren't watching Sharknado for deep character development. 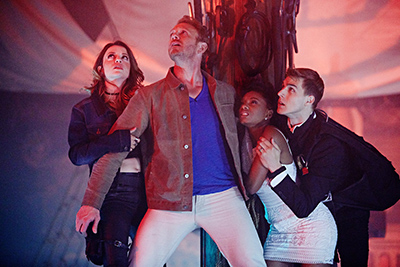 I found myself cheering and laughing over and over with so much going on. This installment is completely bat crap crazy and filled with absolutely outrageous and over the top scenarios. It's raised the bar from the last three and is insane in the best way possible. Everything is bigger and better this time around. 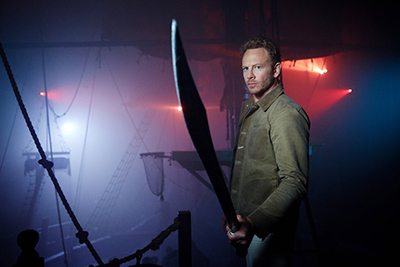 Also, while I only watched a rough cut, it seems like the budget of the fourth installment was increased. The production value is better.

I also loved the pop culture references and quotes in the film, from Star Wars, to Star Trek, to The Wizard of Oz, and everything in between. 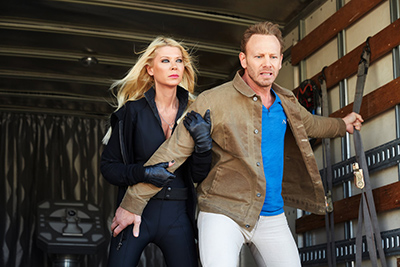 If you are a fan of the Sharknado franchise, you are going to absolutely love the movie. If you are new to it, remember it's not a film that takes itself seriously, and just enjoy the ride. Be sure to tune in to Syfy Sunday night for Sharknado 4: The 4th Awakens. Also, if you can, follow along on social media, that adds a great element to the experience. I know I'll be live tweeting along with everyone else (@scifivision).
Twitter
BotonSocial por: SocialEmpresa
Category: Film Reviews