Jupiter Ascending: A Visual Masterpiece That's Worth A Watch

Jupiter Ascending follows Jupiter Jones (Mila Kunis), a young housecleaner who was destined for much more. With an uncanny resemblance to galactic royalty, she is thrust into the middle of a family drama of siblings vying for control of Earth. Accompanied by a genetically engineered hybrid hunter, Caine Wise (Channing Tatum), she must fight to protect the planet from tyrants who are set on harvesting off the world's population.

As expected at this point from an action film by the Wachowskis, the visuals on the film were absolutely stunning. There was always something gorgeous to look at, even when there wasn't action on screen. The world that was created for the movie was quite beautiful and unique, as were the makeup and costumes. The colors were vibrant, and in this case, watching the film in 3-D really helped to showcase the magnificence. 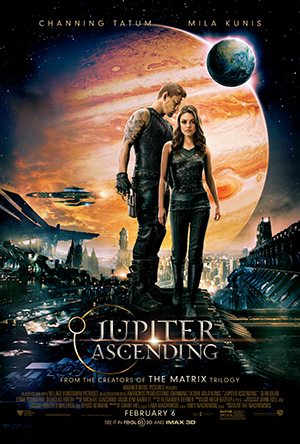 The action scenes themselves were directed well, and of course looked fantastic. The choreographed fights and rescue scenes were a lot fun to watch.

If you take away the visuals, the movie still holds up on its own for the most part. Although parts of the story were cliche - boy saves girl; girl falls in love with said outcast boy; girl saves universe - the script was still well written.

It wasn't The Matrix, but it was still a fairly rich story. Just don't go in expecting a thought-provoking tale like the Wachowskis' previous projects. The script, however, was still somewhat cerebral and dealt with issues of morality and the worth of the few versus the many. There were also some interesting connections to be made between egg harvesting and the film's youth/life harvesting.

With a layer of a love story, it was still an action flick at its core, but it definitely was quick moving and had a brilliance in visual style that served to enhance the story.

The characters not only had unique looks, but the idea of the various genetically engineered hybrids were interesting concepts, which was only enhanced by their accouterments. The film also boasted quite a bit of cool future technology for its characters and the world around them, such as anti-gravity boots and invisible weapons and vehicles. 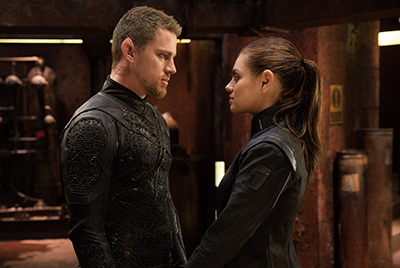 The cast was well chosen. The chemistry between Tatum and Kunis was slightly lacking, but their performances otherwise were believable and were easy to root for. Another standout of the film was Sean Bean as Stinger Apini.

The music of the film was also brilliant, scored by LOST's Michael Giacchino.

In my opinion, the few story and theatrical shortcomings of Jupiter Ascending were eclipsed by the beauty of the film. Sometimes it was hard to even know where to look with so much going on, and I haven't been as visually impressed since probably James Cameron's Avatar. In saying that, while it won't win awards for the story, it was still very enjoyable for what is was, a fun sci-fi action flick, and it can easily (and hopefully) be a set up for more films in the future. The world is rich with interesting ideas that could go a lot of places.
Twitter
BotonSocial por: SocialEmpresa
Category: Film Reviews