Exodus: Gods and Kings, the stunning action adventure drama directed by Ridley Scott, tells the story of Moses, the man who freed the Israelites.

Christian Bale (American Psycho and The Dark Knight Rises) is transformative as Moses. In him, the audience can see a tough warrior, a simple shepherd, and a man capable of parting the Red Sea. Bale shares the screen with Joel Edgerton, who plays the Egyptian Pharaoh Ramses. Bale never seems hollow or withdrawn in the film, as he glares up to the sky and denounces God.

Exodus: Gods and Kings has enough sand and chariots to win the heart of the most stoic movie watcher. It is a story of power and enormous consequence. The lead actors consider who God is, and whether God or man has the greater power to kill. The swordplay and the emotion behind it are fierce, and the film, as a whole, is relentless. It doesn’t focus so much on good and evil, but rather, on the juxtaposition of massive impact and new movement. Though movie making has never seemed bigger or bolder, the film brings up real issues of humanity and frailty. 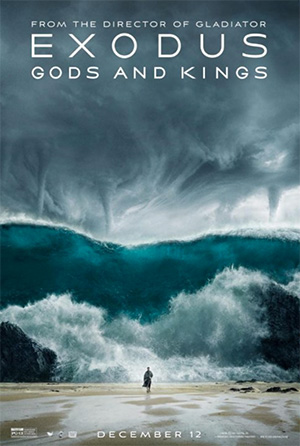 Gladiator Director Ridley Scott has an impressive command of the screen. As Moses dynamically leads 600,000 slaves from Egypt, the main character faces every force of nature. Pestilence and plague are featured, with outstanding visuals in ash grey and green. Swarms of frogs, bugs, and alligators fill the screen. In some ways, it’s a perfect disaster movie. Mountain tops collapse. Hundreds of people get crushed under enormous waves, all in 3D.

Written by Adam Cooper, Bill Collage, Jeffrey Caine, and Steven Zaillian, Exodus: Gods and Kings is about suffering. The script only lightly treads on the stories about the burning bush and great stone on which the Ten Commandments are written. The creative team is less interested in a damning prophet and more interested in the simple shepherd that could lead the Israelites to the Promised Land. 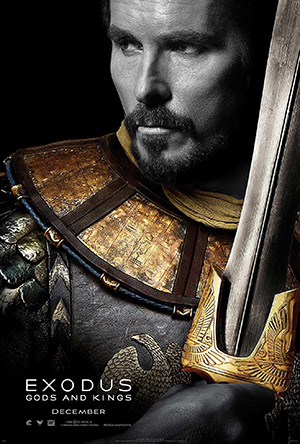 There are short but impressive performances by Ben Kingsley and Sigourney Weaver. Aaron Paul and John Turturro are also in the film. Cinematography by Dariusz Wolski celebrates the glory of Egypt. Wolski and his team painstakingly build the world. The civilization presented is splendid, with enormous statues in the city square, sensuous meals, and chairs decorated by golden lions. The sweeping music composition by Alberto Iglesias enhances the astonishing visuals of this apocalyptic film. Sometimes light without being sentimental, the music is continuous but never overtakes the visuals.

There is no trite Hollywood ending. For Moses, many roads were traveled, and many more will continue. Exodus: Gods and Kings hits movie theaters on December 12.
Twitter
BotonSocial por: SocialEmpresa
Category: Film Reviews