Tonight, as part of Syfy's 31 Days of Halloween, is the premiere of the horror film The Crooked Man.

During a slumber party of twelve year old girls, one of them, Olivia, who declares she isn't scared, is persuaded to sing a rhyme the girls find on the internet that is said to kill you after you sing it. Things go terribly wrong when one of the girls is killed by the demonic Crooked Man (Dmitrious Bistrevsky), and Olivia is blamed.

Six years later, when Olivia (Angelique Rivera) leaves the mental institution and tries to reclaim her life, those involved that night six years ago start to die, and she knows the Crooked Man is still after them, but will anyone believe her? She enlists the help of her friend's brother, Noah (Cameron Jebo), and they search for clues and the man who put up the website (Michael Jai White) to help stop the Crooked Man. 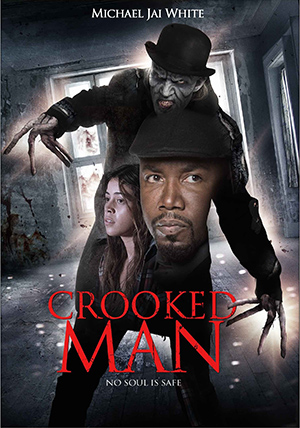 After having watched the film I have mixed feelings. The story itself plays out fairly well, even if it is full of clichés. It's still a fun horror flick like a lot of those that come to Syfy. It's creepy, but not super scary. It's also not extremely gory, as it could have been, which I appreciated.

The actors performed well for the most part, but there were a few times where characters suddenly accepted that the story was true without much convincing.

The effects were a mixed bag. The breaking bones were creepy at times, but sometimes the stilted movements of the Crooked Man were a little off and hokey. I'm not sure if the screener had all the effects completed or not.

Regardless, all in all, I did enjoy the film. It's a great start to Syfy's 31 Days of Halloween.