this may, entertainment one BRINGS ONE OF ABC'S breakout primetime SERIES BACK TO DVD in an explosive bonus-laden set, JUST before THE TV PREMIERE OF seASON four!

Hailed as "Grey's Anatomy with guns[1]," the breakout, hit primetime series ROOKIE BLUE is returning to ABC on Thursdays nights later this spring for an explosive fourth season.  Just before the rookie cops of television's sexiest police drama appear in all-new episodes, be sure to arm yourself with every episode of their third smash season with ROOKIE BLUE: THE COMPLETE THIRD SEASON, packed with tons of bulletproof bonus features! 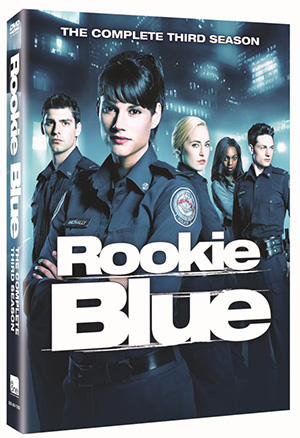 The soul of this close-knit group is 26-year-old Andy McNally (Peregrym), who comes from a tough-as-nails law enforcement family and has wanted to be a police officer since before she could walk.  Joining her is Traci (Enuka Okuma), a tough-talking party girl who's also trying to raise her young son; Dov (Smith), the archetypal thrill-seeker who's trying to make up for years of being overprotected; Chris (Travis Milne), the straight-and-narrow poster boy for the force; and Gail (Charlotte Sullivan), the politico whose ambition is so blind that she'd trample over anyone who gets in her way.  Add a rogue training officer and pretty-boy detective Luke Callaghan (Johnson) to the mix, and things get very interesting for Andy.

These rookies trained together at the Police Academy. They learned the rules together and they fought, drank and slept together. Out on the job together, they're learning first-hand the hardest kind of policing there is. These rookies have kicked in doors, taken down criminals, kept people safe and saved each other in the process.  Now, in Season Three, they'll do it all over again... only better.