IN ONE OF HIS FINAL PERFORMANCES, OSCAR® NOMINEE MICHAEL CLARKE DUNCAN LEADS A STELLAR ENSEMBLE CAST -- INCLUDING VIVICA A. FOX AND EMMY® WINNER LORETTA DEVINE -- IN AN UPLIFTING URBAN DRAMA

Where do you turn when the streets turn against you?

Sixteen-year-old Xtra Keys (Roger Guenveur Smith, American Gangster, Final Destination) lives by a few simple rules, all rooted in a world of brazen, retaliatory violence. Xtra hopes to raise his son better than his boozy, razor-edged mother raised him and his younger siblings and just might get his wish when he's thrust into the world of the HIVE, an unorthodox alternative school full of other discarded boys. Based on an actual school in North Carolina's Bertie County, IN THE HIVE is a movie about the power of love and a gripping reminder that we can all make a difference in a child's life, even the ones who've been relegated to the discarded heap for far too long. 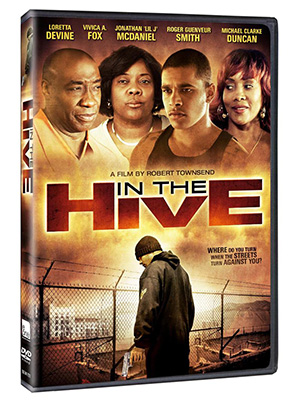