AS SEEN ON LIFETIME, THE most anticipated, controversial and publicized role of  Lindsay Lohan's career...

THIS MAY, THE FIERY TALE OF ROMANCE BETWEEN HOLLYWOOD ROYALTY ELIZABETH TAYLOR AND RICHARD BURTON - ONE OF THE MOST-WATCHED  CABLE ORIGINAL MOVIE PREMIERES OF 2012 -  ARRIVES ON DVD 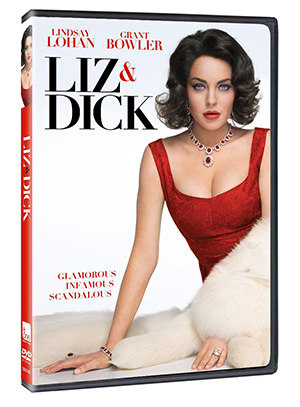 For nearly a quarter of a century, Elizabeth Taylor (Lindsay Lohan) and Richard Burton (Grant Bowler) were Hollywood royalty and their fiery romance -- often called "the marriage of the century" -- was the most notorious, publicized and celebrated love affair of its day.  Swarmed by paparazzi worldwide, their love affair was played out entirely in front of the media from the time they met on the set of the major motion picture Cleopatra, left their respective spouses, married and divorced, only to remarry and divorce once again.  Despite their roller coaster romance for the public eye to see, Liz and Dick shared an undeniable love greater than most people could ever dream of.  As seen on Lifetime, LIZ & DICK drew four million viewers, making it one of the most-watched cable movie premieres of 2012.