Blu-ray Review: Good Boys is Full of Laughs - Out Now

Good Boys is comedy that follows a trio of sixth grade boys, self-dubbed “The Beanbag Boys,” in their adventures. Max (Jacob Tremblay), who seems the most eager to grow up, thinks he’s in love with his classmate Brixlee (Millie Davis). Thor (Brady Noon) loves to sing and dreams of leading the school musical, Rock of Ages, until he’s teased by the popular kids. Lucas (Keith Williams) just wants his parents to stay together.

When Max is invited by a popular boy (Izaac Wang) to a “kissing party” where Brixlee will be, he desperately wants to learn how to kiss. At his friends’ insistence he decides to borrow his father (Will Forte)’s drone, which he’s been specifically told not to, to spy on his teenage neighbor Hannah (Molly Gordon) in the hope of seeing her and her boyfriend (Josh Caras) lock lips. What they get is a lot more than they bargained for when she and her friend Lily (Midori Francis) take the drone and won’t give it back.

In retaliation, the boys steal one of the girl’s purses and the girls give chase. In the interim the drone is destroyed and the boys skip school to somehow get a replacement before Max’s father returns home.

What follows is a quest involving accidentally stolen drugs and a bunch of wacky mishaps and bad language as they head to the mall while running from the girls. 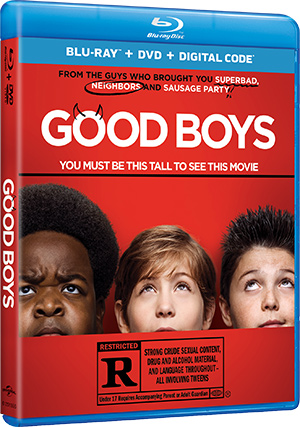 Good Boys, which comes from the filmmakers of Superbad, Neighbors, and Sausage Party, attempts to portray the antics of the grade-school boys with their bad language and curiosity about sex in a humorous way. While the film is rated “R,” the story feel slightly geared towards a young adult audience, even though the content is not for kids. That being said, the humor is still enjoyable by all ages. Most of the jokes revolve around sex, including finding a sex doll and a variety of sex toys, and the fact that the kids really don’t understand what most of what they are saying actually means. There are also various scenes including alcohol (and minors with alcohol) and drugs. As much as it is a coming-of-age tale, it’s not for the kiddies, although it should be noted there is nothing graphic.

I found myself laughing hard at the raunchy jokes and crazy shenanigans of the boys. Not growing up with any brothers, I can’t really judge the accuracy of the portrayals, but I was highly entertained.

The overall story is cute and works, but it’s nothing groundbreaking, which is okay; it’s all about the laughs, which the film definitely brings.

The three young actors have great chemistry together, are fantastic for the most part (Tremblay is not so good at playing tearful and broken-hearted), and are able to easily carry the film. The girls were excellent additions as were the few adult guest stars littered throughout.

Overall, the film was really funny and enjoyable. If you’re looking for laughs, I definitely recommend Good Boys.


Bonus Features - These can be played all at once or one at a time.


Alternate Ending [2:00] - Instead of at a party, the boys meet up at the school after Thor’s play. Max only appears with Brixlee, so the viewer doesn’t see the breakups. I actually preferred this version to the film’s end; it seemed more believable to me.

Boys for Real [3:12] - Producer James Weaver, Executive Producer Josh Fagen, Co-Writer/Director Gene Stupnitsky, and Co-Writer/Producer Lee Eisenberg talk about casting the boys, how they became friends, and a bit about working with them. The actors also weigh in.

Gag Reel [2:08] - This featurette is filled with flubs, fooling around, and actors laughing and swearing.

Welcome to Vancouver [1:07] - The movie was filmed in Vancouver where Tremblay lives, which he talks about a bit. Stupnitsky and Eisenberg talk about choosing his real school for a filming location. Producers Seth Rogen and Evan Goldberg, as well as Williams, talk very briefly.

A Fine Line [2:41] - This featurette is the cast and filmmakers talking about the language in the film. Often the kids don’t understand what it is they are saying. Jacob Tremblay’s father also briefly appears.

Ask Your Parents [2:08] - The filmmakers talk more about the kids being curious like their characters and them not giving them answers, telling them to talk to their parents. Tremblay also talks about kissing the doll.

Bad Girls [1:45] - The filmmakers talk about the girls being the sort of villains of the story, who really just want their drugs returned. Gordon and Francis talk about their characters and working with the boys. Lina Renan, who briefly appears in the film as Annabelle, is also discussed.

Guest Stars [2:39] - The different guest stars are discussed by the cast and filmmakers and talk a bit, including Will Forte, Lil Rel Howery, Retta, Michaela Watkins, Stephen Merchant, and Sam Richardson.

Feature Commentary [1:29:38] - This includes commentary by Stupnitsky and Eisenberg, who talk about different parts of filming and production. It’s not overly informative or interesting.


Packaging:
The set comes in the normal blue clamshell case with slipcover. The paper inside has the free digital code on one side and a code for a free movie on the other.


Final Thoughts:
The Blu-ray contains a small amount of bonus features that give some behind-the-scenes insight, but with the type of film it is, it’s adequate, as there aren’t any real special effects or big stunts. The best part is the collection of deleted and alternate scenes and ending, while the part with the least benefit is the commentary.

If you like this kind of comedy or the filmmakers other works, it’s definitely worth a watch and is the kind of film that one can likely still laugh at and enjoy on even a second viewing.
Twitter
BotonSocial por: SocialEmpresa
Category: DVD Reviews