When I first received the DVD to review, I wasn't sure what to think with it's title, but don't let that deter you. In retrospect, the title actually fits the mood of the film.

Some Guy Who Kills People is partially a horror movie - it does have murder and blood and guts - but it's also a great character driven story. The star of the film is Kevin Corrigan, who plays the character of Ken Boyd. Boyd is 34 and still living at home with his mother (Karen Black), working as an ice cream parlor attendant. Boyd is very quiet and withdrawn - he's returned from a mental institution after severe mental trauma from being beaten and tortured by a group of high school kids. He releases tension by his comic art, where he can live out his dark fantasies of revenge. 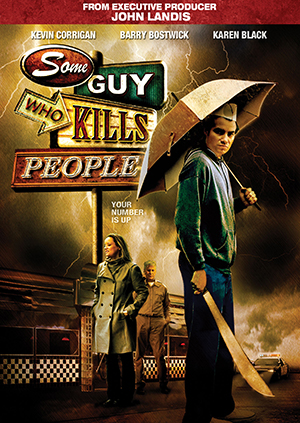 Boyd takes a lot of crap from people, including his mother, who is sleeping with the town sheriff, Walt Fuller (Barry Bostwick), and is also probably the root of a lot of Boyd's problems, and his boss (Lou Beatty, Jr.), his only friend being his coworker Irv (Leo Fitzpatrick). Boyd often dresses up as an icecream cone to both sell the treat and to work parties. When he sees one of his tormentors at such a party, his anger reaches the limit.

Meanwhile while Boyd hunts down each of his tormentors one by one to get revenge, he is tracked down by his 11-year old daughter, Amy (Ariel Gade), who just found out about him from her mother, and wants to form a relationship.

Between all the bloodshed, Boyd starts coming out of his shell by the help of Amy, and eventually connects with socially inept Stephanie (Lucy Davis).

But is it enough? Can Boyd bury the past and start to heal, all while avoiding the sheriff?

Some Guy Who Kills People was nothing like I expected. It does have the obvious bloody murders. However it's also a black comedy; everything is done with dry humor. For example, there is a shot of a severed arm, that still moves, and the sheriff and deputy (Eric Price) investigating the scene make tons of puns, with evidently the sheriff's being unintentional, which makes it even funnier.

Even so, the heart of the film is about Boyd and his struggles. The character is well fleshed out, and throughout the movie you really start to feel sorry for him and almost want the underdog to get away with it as more of the story unfolds and you learn more about what the kids did to him. Corrigan really brought depth to the character and kept him real, and though often comedic, never silly.

The scenes with Boyd and Amy are often very touching, especially when he sees his daughter being bullied. However, I also like the scenes where Amy is almost more of the parent, helping him to socialize. Gade really does a fantastic job as the always cheery girl. 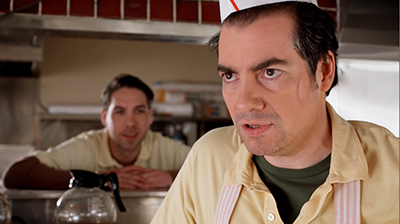 Bostwick also stood out in the film. He was probably the most "outright" funny character. He says what he thinks, like talking about the murders at the dinner table, even in front of Amy, and is very open about sleeping with Boyd's mother.

The script is well written, and not only does the job of making you care for Boyd, but also will surprise you. I felt the story was fresh and offered a unique take into Boyd's mind as it both unraveled and also tried to heal and forget.

The film comes with a few special features.

Audio Commentary - I sampled some of the film's commentary by director/co-producer Jack Perez and writer/producer Ryan Levin on the DVD. The feature talks about different behind the scenes aspects such as why certain choices were made, how scenes were filmed, how they used old school special effects, and other tidbits. They talked multiple times about how they reused sets for multiple locations, such as using the police station for the morgue, and using the same house for all the characters' homes. As far as commentaries go, it's pretty informative if you like learning how a film was made.

The Fifth - This is a short film that Some Guy Who Kills People was inspired by. The Fifth is about a group of men who play poker together all the time and bring in a new member. One of their friends comes into the game late, as usual, and he happens to be a serial killer, so he brings with him a dead body to the game. It ends up the girl is not quite dead, so he proceeds to smash her head into the table during the game. While this is all happening, everyone except the new guy acts like it's a normal occurance and is not disturbed about it other than it's ruining their game. 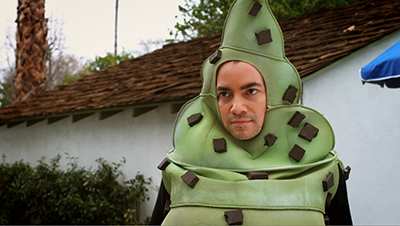 I am glad I watched the full film before this short, or it would have turned me off of the movie. I really didn't get the point to it, and found it gratuitously gross and kind of offensive. Some people may like it, but I don't find this particular brand of dark humor funny.

Making Of - This feature talks about mostly about how they did certain effects for the film, without going digital. Some examples include the decapitation and severed hand. They also discuss filming the movie on a small budge with a short schedule.

The packaging of the DVD is pretty standard. Just the case, disc, and cover wrapping, nothing extra.

All in all I enjoyed Some Guy Who Kills People and it's worth a watch. If you are looking for something fun and different, check out the film.
Twitter
BotonSocial por: SocialEmpresa
Category: DVD Reviews