Katie (Kelly MacDonald), the only single woman left on the small Scottish island of Hegg, lives a boring life with her sick mother. All that changes when the island is visited by famous movie star Lara Tyler (Alice Eve) and British author James Arber (David Tennant), as they come to the remote location after their first wedding attempt was botched by the paparazzi. The island was chosen because James previously described the castle where they would be married and the island in his novel - in gross exaggeration. Lara's assistants work feverishly to transform an entire castle to be perfect for the bride, as well as take precautions to keep the press at bay.

When it's apparent that the press cannot be so easily swayed, the assistants decide to find a decoy bride. ? 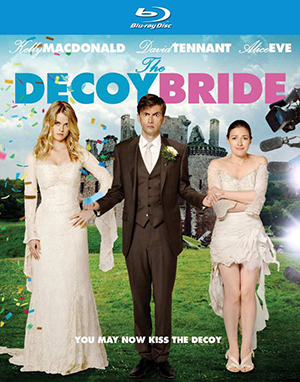 They choose Katie, who is not happy about it but willing to wear the wedding dress for a few hours only, because they will pay her well, and she needs the money to fulfill her mother's wish to travel before she dies.

However, a few hours turns into a lot more when James and Katie are accidentally married for real, James having not even been aware of the switch. Neither of them are happy as they are locked in the castle by the assistants to keep the press from seeing them as well as to keep James unaware that his real bride is missing after hiding from the press.

Hilarity ensues and sparks fly as the two try to set everything right.

Decoy Bride is a cute romantic comedy, but fairly predictable. That being said I still really enjoyed it. The banter between Tennant and MacDonald was great and their chemistry was believable. There were a lot of great lines and the quirky characters were likable.

All in all Decoy Bride is a charming romantic comedy and worth a watch.

As for the actual packaging, it's pretty standard, nothing extra but nothing missing either. The special features are listed on the back which is something that to me is important on packaging. I reviewed the Blu-ray version of the film. The bonus features consist of:

Interviews - There are eight in all, including ones with Tennant, MacDonald, Eve, Michael Urie, Federico Castelluccio, director Sheree Folkson, writers Neil Jaworski and Sally Philips, and the producer, Robert Benstein.

Behind the Scenes - The feature is basically raw footage, showing the actors filming from different angles, as well as a couple basic location shots. Some examples of scenes are the one when James and Lara arrive at the castle on Hegg, one of Lara in disguise, and one where James and Katie are trying to escape the castle. The only one that really is interesting is where the crew is dirtying and wetting Tennant and MacDonald for a scene.

Deleted Scene - Scene is singular because there is only one scene, it's very brief, and honestly wasn't worth even watching; it's only one line.

FX Shots - This consists of scenes where they changed things, such as a crowd scene they added people to digitally and the changes they made to the exterior of the castle and grounds.