In Reboot, which premiered Tuesday, Hulu decides to revive and update a fictional sitcom from the early 2000s, “Step Right Up,” reuniting the dysfunctional cast. Eager to restart their careers, but full of insecurities and hangups, the performers try to find their way as they learn how much things have changed.

The series comes from the mind of Modern Family’s Steve Levitan, which was what really attracted star Keegan-Michael Key, who plays Reed Sterling, to the project. “[It was] the pedigree of Steve Levitan really more than anything,” the actor told SciFi Vision during a recent exclusive interview. “When we first discussed the show at the beginning, I was like, Modern Family is such a bonafide solid show that I [want] to be involved with something that would be of that caliber.”

It isn’t just the showrunner that makes the job enjoyable, however. “I would say the easiest thing, really, is that I have such a wonderful collaborative cast to work with, and that makes almost everything else easier,” said Key. 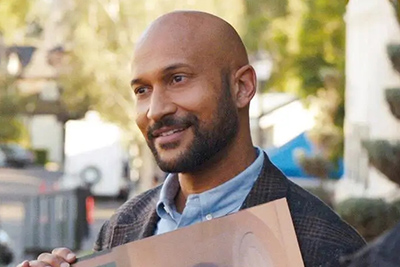 On the flipside, having a show within a show can sometimes get a bit confusing. “[Y]ou look at your call sheet every day,” explained the actor, “and there's your name, then your character's name, and then [the name of] the character that your character’s playing, and so it was sometimes a little mind boggling.”

There are a lot of crazy things that happen to the characters of the fictitious sitcom, but thankfully nothing like that has ever happened to Key, who feels, like Reed does, that he’s fortunate to be where he’s at in life. “I've learned to treat every moment, I think, as precious, especially in this industry, in this business,” the actor told the site. “I think it's interesting that the characters…are like, ‘Oh my god, we're really very fortunate to be here.’…It was a nice reminder that I'm also fortunate to be in this place in my life, in this place in my career, because it's a wonderful miracle. It really is.”

For more, including what sitcom he’d like to see rebooted, if there is a prankster on set, and more, watch the full interview below, and check out the all new series Reboot, the first three episodes of which are now available to stream on Hulu.