Tonight, Starz airs an all-new episode of the historical drama, The Serpent Queen. The series is a contemporary take on the rise to power of Catherine de Medici, told through flashbacks from her teenage years and through adulthood. Young Catherine is played by actress Liv Hill, with Samantha Morton playing the elder Catherine.

Hill admitted that playing Catherine de Medici was a bit daunting once she learned more about her. “I didn't know who she was beforehand, to be honest,” the actress told SciFi Vision during a recent interview. “Then, when I read about her, and I realized her notorious, infamous reputation as a sort of evil queen…it was a gift of a character to play. Also, the idea of playing Samantha Morton young was also a little bit overwhelming.” 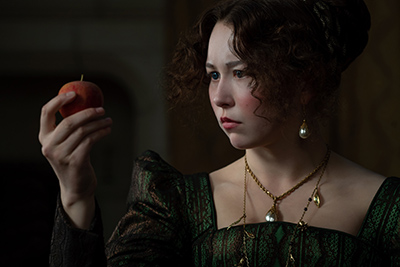 The part of the character that Hill had the most difficultly relating to was her bravery and belief in herself, which she hopes she can take with her. “I think resilience really, and bravery, that unwavering self-belief she had in herself despite the belittlement and being degraded by these men surrounding her, I wish I had that, that resilience in my life, and I hope to take that in the future,” said the actress.

The costumes really helped her to find the character. “[The corset] was very tight and restrictive, which I guess is what the patriarchy wanted women to feel,” explained Hill. “But also, what it did do though, it changed my posture, and it gave me this power stance. Catherine was someone who didn't belong in the French court; she was subjected to a lot of prejudice, because she was Italian. Having that different posture, the shoulders back, it made me feel this confidence and power that Catherine needed in order to survive.”

For more from Hill, including where she pulled inspiration from, what she was surprised to learn about the monarch, and more, watch the full interview below, and be sure to check out Serpent Queen, now on Starz.