Recently the third and final season of Locke & Key premiered on Netflix and star Aaron Ashmore, who plays Duncan, spoke with SciFi Vision in an exclusive interview.

This season is lighter for Duncan. “He's planning his wedding,” he explained to SciFi Vision. “He's going to get married. At this point, I think, in the story, everything sort of settled down, and Tyler (Connor Jessup) is off kind of finding himself, but things have settled down and life is moving on. I think Duncan's very happy to have Brian (Milton Barnes) back and very happy to be getting married after all the craziness that happened in season two.”

Ashmore also talked about what he himself got out of working on the series. “Much like a lot of the other shows that I really enjoyed working on, I love the family element to it,” said the actor. “Obviously, there is literally a family with the Lockes, but also all of the other characters, how they all band together…how everybody sort of works together in this common goal…The shows that I work on and things that I like, that's usually what it comes down to are these amazing [characters] working together, but also the people that sort of bring it all together. That's what I would say I enjoyed the most out of it.” 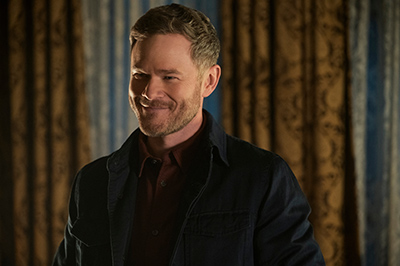 We also asked him if there was anything physical he took from the series. “I did get some keys,” said Ashmore. “At the beginning of the year, from season two…A company had made some chain keys. So, [I] got one of those.”

Ashmore added that he also collects cloth chair backs and got one from Locke & Key as well. “It's a beautiful Locke & Key background with ‘Duncan Locke’ on it,” he explained. “[Those are] sort of really easy to keep; they just tuck away…I've gotten props from shows a lot of times, but a lot of times they're expensive, or they're going to archive them or auction them off or whatever, so I for sure always go for the chair backs.”

With the last season released, the actor wants people to have fun with the series. “I think that at the end of the day, a little bit of escapism, and some fun, I mean, that's what I like to watch these shows for,” said Ashmore. “I also hope that by the end of the third season, that people are really happy with the way it ends. I mean, it's always difficult to end the show, especially when people could make arguments that you could continue to go on with the show for another season or so. I really hope that people, especially fans from beforehand of the source material, enjoyed the ride and are happy with with how it ends, because I think it's a great show and [it was] just lovely people to work with and a great show to be part of.”

Watch the full interview below and check out the final season of Locke & Key, now available to stream on Netflix.