Recently the cast of Resident Alien was joined by Nicola Correia-Damude, as Detective Lena Torres, when she came to Patience to investigate the murder of the man whom Asta (Sara Tomko) killed to save Harry (Alan Tudyk). Corey Reynolds, who plays Sheriff Mike Thompson, and Elizabeth Bowen, who plays Deputy Liv Baker, recently talked to SciFi Vision during a roundtable about how Torres' arrival in the town has upset the status quo between the two characters. “I think she comes in no holds barred, business as usual,” said Bowen of Torres. “Whether she is just oblivious to it or she just doesn't care, she completely upsets the apple cart between the two of us, and I don't even think…Sheriff Mike realizes how much she's upset the applecart. He's just thinking more I think about his reaction to her, like, ‘Who is this person?’ Whereas Liv is like, ‘No one's paying attention to me. No one's listening to me. Everyone's forgetting about me.’ I mean, you'll literally see sometimes where they actually forget she's even in the room with them, and that is incredibly upsetting to poor Liv.”

Reynolds felt the same. “I think in a lot of ways Mike meets his match,” added the actor. “Deputy Liv is his match in one way, but she's more flies with honey than detective Torres…I think in some ways, she sees herself very similar to I think how he sees himself, except I don't think she has the insecurities that Mike has. I think she's presenting as competent as she actually is.” 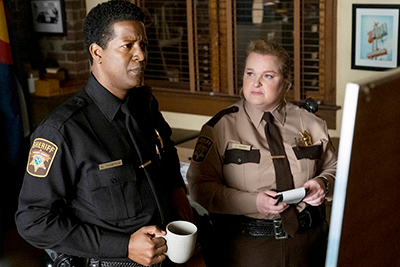 Before Torres came into the picture, Liv was making some headway in getting the sheriff to listen to her finally. Will that continue? “I think she is going to be able to get him to listen more,” Bowen told SciFi Vision. “So far in the season, it's sort of come in fits and starts. You think they're gaining ground, and then he sort of dismisses her again, and I think you're going to keep seeing more of that. But even if he's oblivious at times, according to some other stuff that's going on in his character's personal life, I think he's always going to come back round to realizing she's sort of the voice of reason, and that she's been seeing what's really going on all this time.”

Reynolds agreed. “I think that she's proven that she can be there and will be there for him,” he explained. “I think that there's a desire on his behalf to reassure her that he'll be there for her as well. So, again, the ebb and flow of how the season will go, we'll see them kind of swing out and swing back together. That's the dynamic that exists with them.”

Watch the interview below and watch an all-new episode of Resident Alien, tomorrow on Syfy.