Emergency, from writer K.D. Dávila and director Carey Williams, follows a group of college students who find a high school girl (Maddie Nichols) unconscious in their living room during a night of partying and struggle with whether or not to call for help.

SciFi Vision recently talked to the cast in an exclusive interview about what first drew them to the roles. Donald Elise Watkins, who plays Kunle, knew it was a special project right away. “You want to be a part of things like that,” the actor told the site. “It's like, ‘Whoa, this is special; this can go somewhere. I feel like I can offer my assistance, and I think that there can be a lot of people that can play this, but there's something else that I can bring to this character, to this role, that will [have] of some sort of merit.’ I've never really had an opportunity to delve into a character in this way.” 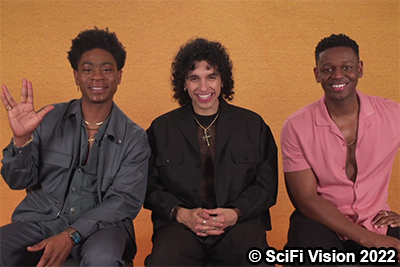 For R.J. Cyler, who plays Sean, it was the fresh approach to the subject matter. “Usually, it [doesn’t] come across this ingestible,” said the actor, “because it'll either rub you too much the wrong way or kind of push the envelope in your face to where you can't see [anything] else. So, just the balance of a script that was actually attractive to my eyeballs was like, ‘I am with that; I see what she’s about.’ ”

“I think one thing with the script that I agree with…is that there is no antagonist in the script; there's not a villain,” added Sebastian Chacon, who plays Carlos. “It’s not like there's a cop that's chasing us all night…It doesn't lay it out as simply as that. The villain is kind of fear, and, trauma, perception, the world. It's just these circumstances.”

For more, watch the full interview below and check out Emergency in theaters now and on Prime Video starting Friday.