Now & Then, the new mystery series from Apple TV+, has a pretty straightforward setup: a group of college friends find their lives are forever changed when a graduation party ends in tragedy. Twenty years later, the remaining five are reluctantly reunited when someone threatens to expose their secrets.

What’s exciting about this production is the study in contrasts: the action is set in 2000 and 2020, with two sets of actors playing the same characters, dialogue in both Spanish and English, and major plot twists that you won’t see coming.

The creative team describes the story as taking place in two timelines: pre-accident and post-accident. For director Gideon Raff (The Spy, Homeland), who helmed the first two episodes, that meant “giving this story a visual language and telling the story emotionally with the camera.” To create that language, Raff used a range of approaches and technologies. 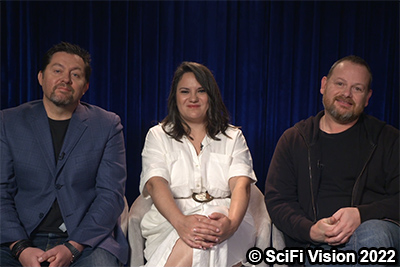 “It's not a flashback at all,” Raff told SciFi Vision. “It's one story. It's their life and we saw it as one story that we wanted to play with memory and emotion together with lenses and colors.” For the pre-accident action, they “used wider lenses and a more pastel look; more sky, open frames” to communicate youthful optimism. “Then, post-accident,” he explained, “we went to a more saturated, claustrophobic long lens look…because in our present, our characters are living a life that they didn't necessarily want to live.”

SciFi Vision also asked co-writer Ramon Campos and Raff about working in Miami, where the series is set. This is not Bad Boys or Miami Vice. Speaking through an interpreter, Campos explained that “In Miami, you’re going to find Mexican, Spanish, people from Colombia, people from America. They speak both English and Spanish and also all the culture is mixed up. We want to tell the story [of] the people that live there.”

Watch the entire interview below and check out the series on Apple TV+.