Killing Eve returns to BBC America for its eagerly anticipated fourth and final season on February 27th. After Villanelle (Jodie Comer) and Eve (Sandra Oh)'s conversation on the bridge at the end of last season, Eve is hellbent on revenge, while Villanelle sets out to prove that she's not the monster everyone thinks she is. Meanwhile, Carolyn (Fiona Shaw) continues to hunt down The Twelve and find the person responsible for ordering her son's murder.

Last week, a few members of the cast and the executive producers of the series got together for a panel as part of the TCA winter press tour to discuss the upcoming season.

When talking about returning to the series, star Comer said that working on the show is always a surprise. “The show definitely keeps you on your toes,” said Comer, “and it’s always so exciting getting to sit down with the script and see where it is that we’re headed. Sometimes when you start a season, you have a vague idea of where the story’s going to go, but a lot of the time it gets figured out as you go along and it’s very organic in that way.”

One of the themes that is explored this season is change and evolution for the characters. “There’re a lot of lessons that I think Villanelle learns that I don’t think she’s actually aware of,” said Comer. “I think she’s so desperate to change at the beginning, and I’m not sure that comes from a truthful place.” 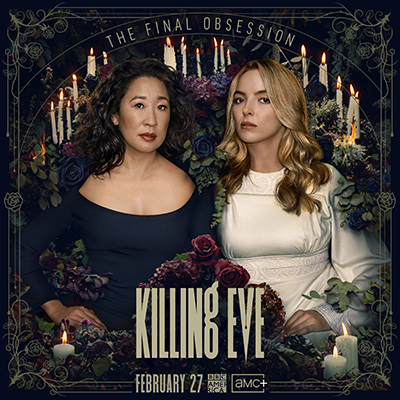 Star Sandra Oh weighed in on Eve’s evolution as well. “I really wanted to establish that Eve physically, energetically is very, very much changed. You see her different in the way that she’s clearly gained skills, that she’s not afraid of violence in herself or inflicting it on others, that she’s [integrated] a lot of elements from Villanelle in either disguises or personas.”

When talking about change, actress Shaw said that in general she doesn’t believe people change, but in storytelling characters have to for development. “The show never let [Carolyn] settle, and I think in that way they are changed of course by experience, but in terms of personality, people stay the same.”

Oh, however, does believe that although people’s personalities may stay the same, people can change. “If they can’t, I just think all is lost,” said Oh and added that for true change to occur you have to “work really, really hard”.

The actress continued that it can be “extremely slow and challenging,” and that she thinks all three characters’ moral compasses have changed.

Speaking of changes, Comer also told the press that playing Villanelle has changed her life, and that playing her she had to learn to “shed a skin” with the character. “I think I was extremely self-conscious coming into this process,” said Comer, “and there was something about playing her that I had to get rid of, and I had to dare and I had to be a little fearless, and that is definitely filtered through my own life, which I’m very grateful for.”

Oh also said that she was grateful for the gift of playing Eve, and although challenging at times, as Eve grew, the process helped her grow as well. “[Growth] doesn’t come in comfortable ways for Eve. So, I don’t think it necessarily happened in comfortable ways for me, but when you’ve been around enough, you just know those rare times that you’ve been able to be a part of the creation, and as an actor it’s a very special place to be.”

Be sure to catch an all-new season of Killing Eve starting February 27th on BBC America and AMC+. Subsequent episodes will be available one week in advance of linear viewers on AMC+, with the exception of the series finale.
Twitter
BotonSocial por: SocialEmpresa
Category: Interviews