Today, Sony Classics will release the film, Nine Days, in theaters in New York and Los Angeles, following with a nationwide release on Friday, August 6th. The film, which was written and directed by Edson Oda, is a unique story that takes place in an outpost in an unspecified location. Will (Winston Duke)’s job is to watch the live points of views of people down on earth on a group of old televisions. When someone dies and a vacancy opens, it’s up to Will, with the guidance of Kyo, played by Benedict Wong, to test and choose an unborn soul to take that person’s place on earth.

Oda and Wong recently talked to Jamie Ruby in an exclusive interview about working on the film, where the concept came from, how it had a profound effect on viewers, and more.

Be sure to check out the transcript following the video interview, and stay tuned for more interviews from other cast members.

SCIFI VISION:  So, to start out, Edson, can you talk about where the idea came from for the movie? 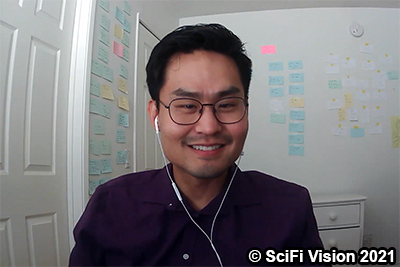 EDSON ODA:   The idea for the movie, I think I can say that the world that I created there came from a thought that's like, “what if.” We always think, like we have a goal, and you project the goal in the future, like, “I'm going to be happy when I get the job,” or “when I get married.” And what if the question raised was like, “What if the goal is now?” So, what if we went through this very weird process or something and were victorious, and now we're here, and we have a chance to be enjoying what [we] achieved, but possibly, because you don't know they went through the process, we’re not enjoying, we were just projecting to the future. So, I think, more or less, the world that I created came from that idea.

SCIFI VISION:  Okay, cool. It was a very interesting concept.

So Benedict, what attracted you to the role?

BENEDICT WONG:   This gem of a script. You know, I've been 30 years in the game, and it's very rare you kind of see something this sort of high concept, and kind of, I just wanted to meet Edson, and this is his first feature, which I couldn't believe

I'm so proud to be a part of this movie, and the experiences that audiences are having are really gratifying, because there're people that are having these deep, reflective, healing moments.

SCIFI VISION:  And Benedict, that makes me wonder, is there a way in which it changed or affected you, after doing this process? Just kind of because of the story? 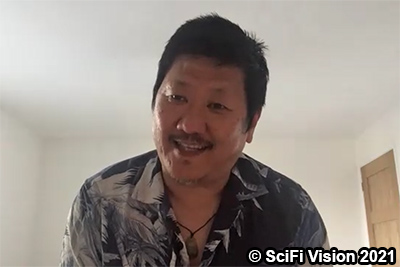 BENEDICT WONG:   I mean, yeah. I mean, again, it's just like, part of the film does sort of speak of cherished moments, and we all have our own personal cherished moments. Just for me, I feel artistically sated that I can kind of give myself and be a part to tell this story. And for me, I'm deeply satisfied to be a part of this and for this to be part of the top of the pile for me for the body of my work.

SCIFI VISION:  Okay. And Edson, why do you think it was important to have a character like Kyo to kind of make sure that Will was making the right decisions?

EDSON ODA:   I think it was very important, just because, I think, when you're dealing with some struggle in your life, or you're really going through a difficult time, you create those blind spots, right? Because you’re just focusing on this problem or something that you did there in the past or some kind of trauma.

And I think Kyo, he is just, how can I say, almost like he's conscious in a way that, “why don't you see it this way; why do you see through that way?” And sometimes Will listens to him, but most of times doesn't, but I think for all of us, we always have this kind of voice in our heads that tries to at least open our minds and our perspective. So, Kyo represents that.
Twitter
BotonSocial por: SocialEmpresa
Category: Interviews