Tomorrow, The Pursuit of Love premieres on Amazon. The romantic dramedy, which is based on the novel by Nancy Mitford, takes place in Europe between the two World Wars and centers around the friendship of Linda Radlett (Lily James) and her best friend and cousin, Fanny Logan, played by Emily Beecham. The two go on the hunt for a husband, and when Fanny marries and settles down, Linda continues to follow her heart wherever it takes her, often stretching their friendship near the breaking point.

In preparation for the premiere, Beecham recently talked to Jamie Ruby of SciFi Vision in an exclusive interview about working on the mini series written and directed by Emily Mortimer, working with James, filming in period costume, and more.

Be sure to check out the transcript following the video interview.

SCIFI VISION:  Was there anywhere other than the book or the script that you took inspiration from when you created the character as you worked on her? 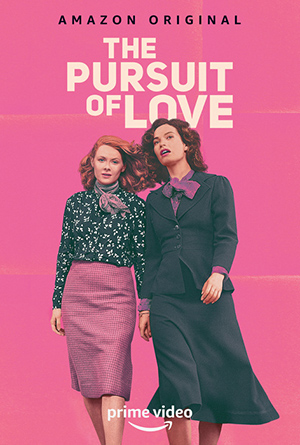 EMILY BEECHAM:   Emily, Lily, and I, we talked a lot together. Lily shared some lovely poetry, actually, but also, we watched a documentary called Ingrid Bergman in Her Own Words, which was really useful from both Fanny and Linda's perspective, because it discussed Ingrid's life and her career and her choices, and she made a choice to live without her children. So, it talks from her feelings of never wanting to be tied down or kind of wanting to feel a certain freedom.

She also was quite vilified for it, and it damaged her career a lot, but, also, it interviews her children and their kind of different feelings about it and kind of how much they missed her and their feelings of loss about that. But also, they had a sort of admiration for her as well and kind of knew that's how she was, and that's how she felt she needed to be, and so [there was] an acceptance from them.

So, it was sort of both sides of that, which was really interesting, because, obviously, as you know, Linda does that, she leaves her child, but also, Fanny was abandoned by her mother as a child. So, that's something she really tussles with, and that shapes a lot of the choices that she makes later, and [that] later on affects their friendship.

So, yes, that, and, of course, I guess, the source material, and mainly talking to Emily, really, and she had so many interesting perspectives and ideas. Emily's got this natural honesty, and that was so helpful in bringing alive sort of whatever secrets or whatever things that kind of were going on with [the girls] and between them and all that sort of stuff. I think Emily is great with friendship, and, obviously, she created Doll & Em, and it's a topic that clearly seems to interest her a lot.

Obviously, this show is about the two finding love, but so much more. I mean, how important do you think is the friendship between the two of them? Because I feel like that's even more integral than the love interests?

Yeah, we were talking about how enriching and how important friendships are. They're probably the most important relationships you have in your life, and they follow you around. I mean, they're always in your life, and even if you make very different choices to your friends, it's sort of like you can experience different things through your friends, or if they've made different choices to you, and you learn from each other, and you also support each other in that kind of understanding, always that forgiveness and understanding, and being seen, being loved, no matter what you do.

For instance, Linda's vilified for a while and feels like she's a scorned woman and alone, but Fanny always loves her and always sees her for the friend from childhood that she has always been and has always seen her as an innocent, as she says.

I think, in turn, Linda always knows Fanny's more kind of adventurous side, which I think Fanny appreciates, and it brings that side of her out, more of a freedom in Fanny.

So, yes, the friendship is so important, and how it evolves as well, which is really interesting, depending on their how each of their individual lives change and how that really kind of pushes their dynamic around a bit, and that's because of the real push and pull between them. They're like strangers and then glue and then back and forth. 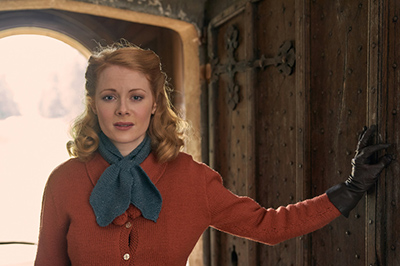 Yes, I think it's also about life and pursuing life and identity and purpose and figuring out who it is you are. And they are women figuring out what on earth it means, [what] their femininity means, and who they want to be, where they want to go. So, there's so many things, I think, but friendship, yes, is at the root of it.

A lot of the show, obviously, they both spend time being jealous of each other, but Fanny is kind of jealous of [Linda] being free and all that, but do you think, by the end, is she finally happy and realizes that what she has with her family is something that has worth? Because she finally seems to but -

Yes, I feel like she gains a lot of understanding when she gets older, and she sort of has more understanding for her mother, which she really is struggling with throughout that whole thing, or doesn't really know what her opinions or feelings are on the fact that her mother left her and who her mother is. And her mother goes from man to man, and she really has a real barrier with her mother for a lot of it, until, at the end, she is kind of more open to her and gets to see her from a different side and [gains a] deeper understanding, as Fanny is also a mother herself now and has experienced a lot more.

But, yes, I think there's a real transition and journey for Fanny along the way, and she does kind of [one] minute think, "Oh, crap, I made a terrible mistake. What have I done?" And then other times, she's deeply appreciative of her beautiful home and her family that she has and the fact that she has treasured her education and she's going to pursue what she wants to do.

I think it really helps that she starts writing at the end, because she really finds her voice and her kind of journey, or she can express herself better through that, because she's probably a bit shyer. So, I think as soon as she really starts doing that, and I think [she] is possibly driven by her love for Linda and the legend of Linda, wonderful, Linda. [laughs]

Can you talk about working with the hair and costumes? She's got some great period pieces.

Yes, I think they're really helpful. Most of the time, I try to ignore them, but also, I mean, in the beginning, it is very helpful. It obviously really informs how you feel and how you move and obviously what your character choices are, but also, at the same time, trying to kind of feel that the period is not unusual, obviously. But I also think the fact that they're quite tight, and they can be quite uncomfortable as well, I think that is also helpful. I always find that helpful, actually, in period dramas, because, of course, the women were quite repressed and couldn't physically move as well as a man. I mean, just envy a man when he can wear a pair of trousers and spread his legs or just like move around. [laughs] 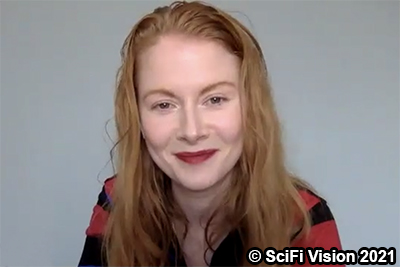 So, it's very helpful for that, but at the same time, also, they're very beautiful, and it's lovely to put on these gorgeous outfits and be in these amazing sets. Of course, men and women dressed so differently then, which we still do slightly, but, I mean, less so.

Did you have the chemistry right away with Lily? Can you kind of talk about building that?

Yes. At first, we had Zoom meetings, because that was when the COVID pandemic just kicked off. It just like exploded right as soon as we were supposed to start; we did get delayed by a couple months. So, we could only talk by Zoom with Emily and Lily, and we shared things that inspired us. We actually had a Whatsapp group as well, and we shared things. We also talked a lot about just like all the things and all the feelings and the kind of journey that the girls were on, individually.

…Lily and I met each other before, when I first came to talk about the job, before I had the job, and that was really lovely. But the thing is, also, we have mutual friends. It's quite a small industry, in a way, maybe, in England. So, I have lots of friends who know her, and also, I just knew that she's quite a vivacious and a warm character, so it would be easy, really, because she's got a lot of the natural, lovely qualities of Linda, which is kind of this sort of effervescent, kind of exciting quality. So, it's easy to think that Fanny could fall in love with her and get sort of carried away with her.

So, yeah, I think we just had to really just dive right in, to be honest. It was very intense, sort of like a roller coaster, really, for the girls. It was more so for Linda, because she's obviously at the peaks of euphoria or the depths of despair, [laughs] whereas Fanny is a bit more like that. But, yeah, we just had to really just jump in, to be honest.
Twitter
BotonSocial por: SocialEmpresa
Category: Interviews