Friday, the film, Boss Level, premiered on Hulu. The movie, directed by Joe Carnahan, stars Frank Grillo as Roy Pulver, who after being murdered, gets stuck in a time loop and must repeat the day over and over until he can stop a secret government project and save his family.

Actress Selina Lo plays the part of Guan Yin, an expert swords-woman and one of the assassins sent to kill Pulver.

Lo recently talked to SciFi Vision in an exclusive interview about working on the film.

Be sure to watch Boss Level on Hulu, and you can also read the full transcript of the interview following the video.

SCIFI VISION:  How did you first become involved in the film? 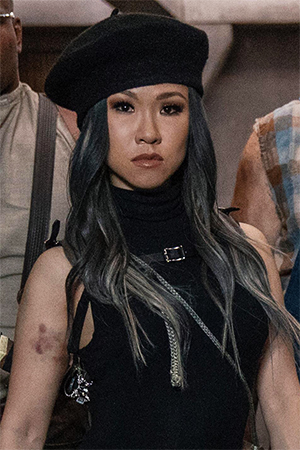 SELINA LO:  I was shooting out in Berlin at the time, and I received the script from my agent. I thought, “Okay, it's a hectic schedule; I'll read it over a couple days.” But I basically got it and got into bed and started reading it, and I could not put it down. It was just one of the most hilarious scripts I've ever read in my life. It was something that I immediately knew I wanted to be a part of.

So, I then self taped, sent that off, and then it was a bunch of Zoom interviews and Zoom castings.

Yeah, it's quite a funny film. Speaking of, so how did you - was it was annoying to try to think of, I don't know, twenty different ways to say the same line over and over again? [laughs]

I remember practicing that and thinking, “This is a really important line. I've got to get this right.” I felt a bit like a crazy person when I was rehearsing, trying all these different things, just shouting out my character's name over and over again, but it's one of my favorite lines in a movie. I’m biased though.

So, I assume you had fight and weapon training, that kind of thing?

I was actually the first cast member out to Atlanta to start training, and I had an incredible stunt team. It was just a lot of sword training, general conditioning - because we were on such a tight shooting schedule - just making sure that I was really prepared for the actual shoot.

Do you find that kind of thing hard? Or is that something that comes easy for you? Because I know it's more choreography; it’s not really fighting, but still.

Yeah, well, I've actually got a background in competitive martial arts. So, I actually, really enjoy any project I get to also use that skill, and that's a huge appeal for me.

I mean, it's always challenging, but I think more than anything, it was just very enjoyable, having that time to just be able to do something that I love with great people. And I think that the results show for themselves. I'm really proud of the action scenes in the movie.

Well, no. [laughs] Yes, we had a dummy. Then, we also used some green screen, and with the sword, sometimes it was the shortened version, and they would CG the rest of it, so all that magic that goes on once you wrap.

Okay. You did that quite a few times... [laughs]

So, when you got the script, though, is there anywhere other than the script that you were inspired by for your character? Like, is there anyone you thought about while you were creating her? 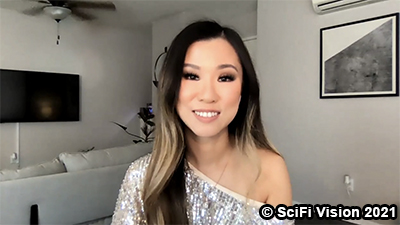 Actually, when I came on board and I zoomed with Joe, he said he wanted to kind of bring some dry humor, like British humor. He was like, “Just feel free to kind of improv. Make it your own.” Initially, she was Asian with an Asian accent, and he was like, “Just keep your own accent.”

Then, I just kind of came up with her and how I imagined she would be, because she's kind of a little unhinged. She's very good at what she does. I mean, she's an excellent swords-woman, excellent fighter, excellent assassin. It's just so fun to play a character like that. And [it’s] interesting that she's so into what she does; that's how she gets her kicks. She's in love with what she does, and she's great at it. Yeah, I kind of took it from there. Then, the humor and the sarcasm, I just thought that fitted well with her and how quirky she was.

Can you talk a bit about working with Frank? Most of your scenes are with him.

You know, Frank's great. He's incredible. I mean, I love all the work that he's done, and I think it really shows just how hard he works. I don't think anyone else could have played this role. And we got along really well, so by the time that we had got to filming, we'd rehearsed so much that it was just fun, and we could enjoy the moment just being present and delivering the scenes and telling the story the best way we could.

What did you find the most challenging, just overall?

I think that just given the tight shooting schedule, it would have been nice to have longer to film it all, but at the same time, it just made sure that everyone was on their game, because we had to be. So, while it was a challenge, it was also really great, because it just pushed everyone.

Also heights. I don't think many people know this; I'm actually terrified of heights. I was on a wire a couple of times, and beforehand, I get really nervous, but once I'm there, it's like, “Okay, you've got to do this.” So, heights is always a bit of a challenge for me.

Did you have, I guess I should say, a favorite scene or a favorite kill, because they're kind of all the same. Most of them are the same, but do you have a favorite out of all of them?

I’ll tell you, what I do love is the move where I'm running across the floor, basically, sideways. I think it's one of the final kills, and I'm running across sideways, just because I've seen that move done before in a really old like Hong Kong action reel, and I suggested it. I was like, “I want to do that move.”

So, we were rehearsed it, and then we ended up using that, and I just think it looks really cool. It was just a fun one to do, but it's always fun just decapitating people and screaming out your name. 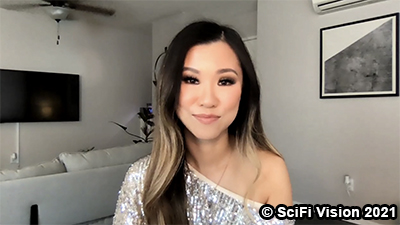 …Other than that scene, what's the most memorable [part] of the role, whether it’s behind the scenes or in front of the camera?

I think, actually, it was the first time I said the line, “I'm Guan Yin, and Guan Yin has done this.” Joe had this funny, genius idea. He said just, “You’re looking as if you’re finding the camera, like you're ready for your close up.” Then, he brought in a fan. It's like, and I don't if you notice, [but] every time I'm speaking in the movie, I've got this fan going in my hair, and it was just so absurd, but funny. I just remember that, thinking, “This is really cool, and this is how talented people create these movies with really specific detail that make a huge difference.” That was just fun. I just thought it was a really cool addition to the character.

Yeah, it adds to the comedy.

…You were talking about how that [one] scene looked. Have you seen the finished film? I'm not sure how much you guys get to see.