Tonight, Wynonna Earp returns with the first of its last six episodes, starting with “Love’s All Over.” While Wynonna (Melanie Scrofano) and Doc (Tim Rozon) are still not on the best of terms, Waverly (Dominque Provost-Chalkley) and Nicole (Katherine Barrell) celebrate their engagement with a bachelorette party that proves love is in the air.

During a recent junket for the series, Rozon talked to journalists about his character letting go, how he feels about the series ending, what’s to come, and more.

Be sure to watch Wynonna Earp on Syfy, and you can also read the transcript following our portion of the interview.

SCIFI VISION: Tim, can you maybe just tease some of the scenes that we're going to get this season between Wynonna and Doc? Obviously, their relationship is still very strained this season, but maybe you could just talk to their journey this season? 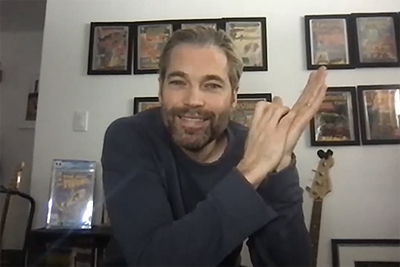 TIM ROZON: Oh, well, I mean, I think where we're at in this season, Doc is finally understanding that to have a future, he needs to let go of the past. I think for Wynonna, she's holding on to that. In so many ways it's easier for Doc to let go in the sense that he never had the burden of being the one that had to fight the curse. Throughout this entire show, don't forget, Wynonna is the one who had to save the day at the end of the day.

Other characters, we came in and we fought, and Waverly (Dominique Provost-Chalkley) did amazing things, and Officer Haught (Katherine Barrell) was doing great stuff, but you needed Wynonna. She was the only one at the end of the day who could really save the day. So, I think it's not as easy for her to let go, but I think Doc understands until they both let go, there's just no future. I think we're gonna see a ton of that.

SCIFI VISION: This season is so funny, I just have to say that.

SCIFI VISION: So funny. Yeah, a lot of the episodes, but some in particular even more than others.

TIM ROZON: Yeah, well the premiere is hilarious, I know that. [laughs] It's funny; we took this massive crazy break in between airing the two episodes, and when we’re coming back, it's one of the funniest, craziest ones of the year. I just hope people don't think we're getting any loose ends tied up in this one. This one is just mad.

QUESTION: Given that the mid-season finale kind of left matters between Doc and Wynonna on pretty shaky ground, could you talk a little bit about how your relationship with Melanie has changed over time and kind of how you manage the ups and downs of Doc and Wynonna’s relationship sort of together?

TIM ROZON: Oh, well, I mean, I don't think our relationship’s anything like the characters.’ [laughs] It’s pretty unhealthy. Yeah, you try and keep them pretty separate, at least I do.

You know, I'm very fortunate in the sense that when we wrapped, I started five days later on a new show called to Surreal Estate [sic], and lo and behold my director for Episode Five and six was none other than Melanie Scrofano. So yeah, I'm very fortunate that our friendship continues whether or not the show will continue. We will continue to work together and talk and be friends.

We're very lucky that we're a pretty tight little unit of a cast, and we all kind of communicate and stay together. When we found out that this might be the last season, we all had a Zoom meeting together to talk about it and just get together, and [for] everybody get their feelings out. So, we're very lucky.

I'm pretty fortunate that our relationship is not like the characters’; that would not be good.

QUESTION: You've been on two series in the last year that, I think, you can probably qualify as shows that were little shows that could that just kind of exploded in terms of having these really dedicated fan bases, with Schitt’s Creek and of course with Wynonna. Both of them are on basic cable and not exactly shows that you would find as easily as on broadcast, but they’re shows that were found and really are beloved. Do you get a sense, as an actor and working with the great writers and directors that have created those series, [that they were just] in the right time and the right place, or that particularly there was something about, even Wynonna, just hitting a fandom that has just never been really serviced in the right way, and the show always has.

TIM ROZON: Yeah, I mean, it's incredible that I got to be a part of both of them in the fandoms, because they're equally incredible. Everyone talks about the Earpers, but the Creekers, they’re no joke that fandom, how incredible they are.

But as for Wynonna, I felt something special right away. I knew we had something special, but at the same time, you're very well aware that it's not - [laughs] You know, when you see the first VFX shot of what's happening, it's like you understand what it is. I kind of had this feeling, but it was only when we started doing the conventions, and I literally watched this fandom grow into what it's become that I realized how amazing it is and how fortunate I am that I got to be a part of that. You know, forget the show. The fandom is more important than the show; it really is, what they've created and just this community of acceptance and kindness and warmth and compassion. I've met amazing, beautiful people that continue to be amazing and beautiful and will continue without the show. So, it's absolutely incredible.

Then, to be on Schitt’s Creek, it's kind of lucky. It's different in the sense that Schitt’s Creek is really important also as this television show. Not that the message that Wynonna is telling us isn’t incredible, but, I mean, there're demons, and you're not going to get everybody. [With] Schitt’s Creek, just everybody needs to watch it, especially where we're at in the world right now, just the messages and the other [beauty] that's being told and the truths that hit and resonate with so many people, not just certain members, but everybody, which is great, because, that's it. When we all finally come together, we'll find some some happiness. So, just watch more Schitt’s Creek everybody. [laughs] That show is very important; it's very important now.

…There's not an episode of Schitt’s Creek you can't watch. They're all just relevant, very important. [I’m] very lucky to be a part of two incredible shows.

…And oddly enough, the very next show that I started was a show called Surreal Estate, with Sarah Levy from Schitt’s Creek. So, we just reunited again filming. That was awesome.

So, hopefully it will continue. You know, if that's gonna be the third show that's got the great message and fandom, sign me up.

SCIFI VISION: In the premiere, there are some nice dancing moments that maybe aren't the pairings we would expect. Can you talk about that scene? Because that was one of the funniest [scenes], I think, of the episode.

TIM ROZON: Yeah, you know, it was funny, but for me, also, because of what we were talking about in that scene, it's unreal scenarios, but there was one scenario that you couldn't fake.

TIM ROZON: And that was beautiful. That's what I love about Wynonna Earp. You get these scripts, and if you really you break it down, it's like, “Oh, my God.” You have this scene, and it's madness. This person is dancing with that person; they shouldn't be, and it's crazy.

But then, what's really, for me, the heart of the scene, is that moment of - you can't fake that, what people have, and the heartbreaking part about it is they're the only ones that can't see it, when it's so obvious to everybody else. Everyone else can see, and the audience will get to see it so evidently, but the two characters themself can't see it. That's what I love the most about it. The rest of it, it's funny, and it's great, but that, for me, I just remember thinking, “Wow, that's magical writing.” That's so smart to be able to put that in there. You just think, “Oh, it's this funny moment of craziness,” but no, actually, there's something sad happening here too. 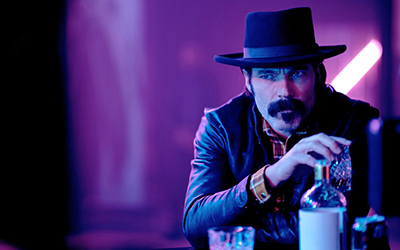 QUESTION: I guess this happened a season or two ago, but can you talk about some of the challenges for you, as an actor, with Doc becoming a vampire? Then, maybe a tease…kind of how that will come into play for this last batch of episodes.

TIM ROZON: Yeah, it's been difficult sometimes playing this character, because he does some things that just go against what I would do, but, you know, I'm playing a character. But I do remember when I finally read the final episode of Season Four, I remember the first person I talked to was Emily [Andras], and I said, “Thank you. Thank you for the gift of just such an incredible character,” because to finally see the arc all the way through, it means so much that he lets go. He lets go of all that stuff, because he understands that to have a future, you've got to let go of the past. Sometimes you’ve got to let the old ways die; that's how [you’re] going to move ahead.

I mean, it's like kind of where we're at in society now. The old ways gotta go; things need to change if we're going to move forward. I think that's where Doc Holliday was.