March 1, the new science fiction series, Debris, comes to NBC. In the show, the wreckage from a destroyed alien ship has fallen from the sky. Two agents, Bryan Beneventi (Jonathan Tucker) from the US and Finola Jones (Riann Steele) from the UK, must come together to work to find each piece of debris that messes with the laws of physics, as well as people’s lives.

Recently, SciFi Vision was able to attend the Debris panel during the TCAs at which stars Tucker and Steele, as well as executive producer J.H. Wyman, took part in a Q&A.

Wyman said that when they first shopped the show, NBC they said that they wanted a show that would “break boundaries” and was “artist-driven.” 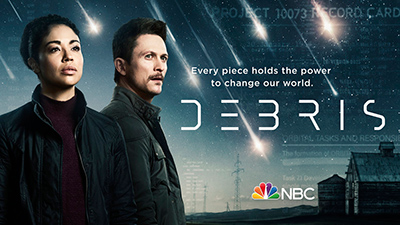 “So, Joel has given us this opportunity to kind of come in and discover the debris, but then it really opens it up the rest of the episode. It's fun for us as actors, for sure, but I think it will be fun for audiences to see, and [it] speaks to the kind of cable‑level sci‑fi that we've become accustomed to, that you can have a bit of both. You can have a case of the week, but you can also have meaningful character development and mythological roll‑out over the course of at least this first season.”

Steele added that she wasn’t worried about audiences coming back week to week with the dense mythology. There’s more to the story. “What is so amazing about these scripts and about Joel's writing is that there is a realism alongside that. You're meeting two characters, who are very flawed and are very broken when you meet them, and we get to also see, along the season, them kind of understand each other through the debris.”

Wyman, who’s known for his sci-fi series Fringe, added that he learned about balancing mythology and procedural elements from working on that show. Debris has both things. “…The biggest lesson I’ve learned, is you'll have a week to week show that people can come back to, but for the real hard-core fans, they understand getting answers, and they understand that there's a plan. There's a feeling like there's this unseen narrator sort of pushing you silently down this road that's going to amount to something, and something big…like-minded people, I think, will really like the show. People that were invested in Fringe, hopefully, will too, but that's who I'm always building for. So, I just hope they'll find that.”

The two actors talked a bit about their characters. Tucker plays Agent Bryan Beneventi. “I have served overseas in Special Forces and have made my way through a process that we'll see in the show into this new coalition agency called Orbital, which is a relationship or partnership between the CIA and MI6. I'm probably, just for the simple logline, much more about intuition. I've had a lot of actual experience on the ground and am guided by my gut, and I'm beautifully balanced by Riann's character.”

Steele plays Finola Jones. “She is part of MI6, and she also joins the coalition from the UK side under Orbital. Orbital was a creation of my father, but you're meeting Finola in a very particular point in her life and in her journey of grief. She's just lost her mother and father, but, through duty, is taking on this challenge to continue his work. So, we follow her along this journey and, obviously, partnering with Bryan and despite the issues, [they’re] finding a way to trust each other.”

Tucker added that, although a lot of it is figuring out what each debris is about, it’s also an exploration of the characters. “My character is going through a rather profound PTSD ride and trying to compartmentalize that and then also use it to connect to people and to the experiences that he's having here, so trying to find that empathy, which is there, that he's had to cover up for so long in order to just exist without causing harm to himself…I get to have that unrolled and unspooled over the course of this first season.”