During SciFi Vision's Midnight, Texas set visit in Albuquerque, New Mexico, the cast and crew came in to talk to the journalists. One of the round table interviews on the first day was with Arielle Kebbel, who plays the character of Olivia Charity, one of few humans on the series, who starts the season newly married to vampire Lem (Peter Mensah). The actress sat down to talk about her character's new husband, how their relationship will affect Olivia, and what else is in store for her character in season two.


We spoke to your “husband.” 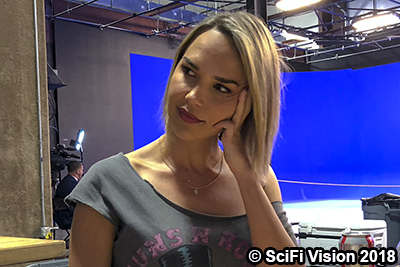 ARIELLE KEBBEL: I hope he only said good things about me.

Well, you know, it’s a pain in the ass for Olivia, but shouldn’t it be? [laughs] No. You know, when we start this season, obviously they’re a newly-married couple. There are some renovations to Olivia’s place to make it Olivia and Lem’s, which is pretty exciting. I think you guys will dig that.

And then we go straight into our psychic connection, which, you know, is very exciting for Olivia for about two seconds and then takes a quick turn, because marriage is a big enough deal for her, and then you’ve got someone who can literally feel her every move. It’s a real struggle between them of like how do you find your independence in this new relationship when you have a psychic connection [laughs] and you can know anything at any time?

So, that’s a real struggle for us, but then of course there’re so many other struggles happening in Midnight at the same time, that we have to learn to juggle a lot of balls up in the air at once. And I guess that’s married life too, you know? You don’t just have your relationship to work through; you’re got real life too.

SCIFI VISION: Can you talk about your interactions with the other new characters this season?

You mean Patience (Jaime Ray Newman) and Kai (Nestor Carbonell). Olivia doesn’t like them, obviously. She doesn’t like anyone at first. So, they come to town and everybody is shocked by their arrival, because they’re building this hotel next to Home Cookin’. The whole town is ours, but especially Home Cookin’; that’s our hangout. So, it’s shocking to all of us, and especially me, because half of the Midnighters are trying to embrace them, half are not really sure, and I’m sitting there going, “This guy’s a scam. What is he doing here? What do they want from us? What’s he doing with her? I’m going to get to the bottom of this.” 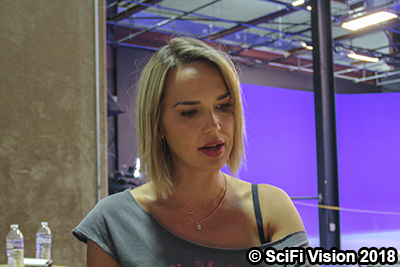 And so, it’s a really fun journey through the season, because we’re met with potentially the season’s enemy in episode one. And so, how do you deal with this face-to-face rivalry and gather research, but also listen to other people, and also he may or may not be saving people’s lives along the way. So, then, is that a scam, or do we trust him? And, you know, all the questions that arise with these two new people coming to town.

I think it makes for a really fun jumpstart to season two, because it’s like bam! Right away, here they are. Are they good or bad, and who’s going to prove it? And what are they going to have to go through to finally get their answer? And then you’ve got all the sub-stories.

And Nestor and Jaime Ray, they’re just two incredibly talented actors. So, this whole season has been stunt cast; all of our guest stars are incredible. We have Jasmine Jones; we have Trace Lysette…This whole season, our guest stars are just incredible. And then adding Jaime and Nestor to the crew, we’re so fortunate. They blend right in with everyone, and they just add; they take it next level. We’re really lucky to have them.

It’s already been established that Olivia didn’t come from a good place. She has a very complicated past. What are you able to share about how much that may come into play during this season?

Well, I think the important thing to remember about Olivia, is whether you’re seeing it or not, or whether she’s talking about it or not, it’s always coming into play, because it’s what’s shaped the woman she is today. Some of her experiences may have happened as a child, but she’s never let go of them; she’s never forgotten them. And yeah, she’s learned to deal with them and be a survivor, but all the surviving skills are poured on top of these initial wounds. 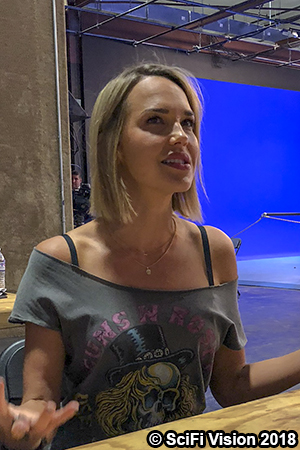 So, I feel like, for me, it’s always important to remember the wounds and then start adding the other ingredients on top to cover the wounds. So, when she’s funny, when she’s angry, when she’s kicking ass, when she’s protecting someone, where is that rooted? Where is that coming from? Because it’s not just like, “Oh I’m supposed to do it in this scene to save someone.” It’s really rooted in this deep place of pain. And for someone to be so strong but actually so broken, I really always wanted to bring that into the scenes.

And this season, I’m really excited for people to actually learn even more of her backstory and to actually really see her allow herself to face that pain for the first time, if not ever, then in a very, very long time.

And I think Lem has a lot to do with that. She’s building a partnership, so now she suddenly feels a little safer to explore the pain of the past. And you know, I think it’s a really brave thing to dig up all those old feelings and let them out. And I think you guys are going to see - well, no, I know you’re going to see a whole different side of Olivia. So get ready! Get your tissues out, okay?

I was asking because I know that in the books, at some point some of the people from Olivia’s past start to pop up, and that leads to revealing some other aspects about her.

Have you read the books?

Yes, I did. It was really important to me. Some people chose not to, and I understand that, too, but for me, it was important to, because Olivia does have so much going on. And because we don’t get that much one-on-one time with Charlaine [Harris], I just felt like I needed to pull as much information to initially make her as possible.

And then once I’d made her, then I felt comfortable to go and play. Now it's season two, and I feel like it’s much more emotional. And we’re not totally sticking to the books exactly, but we’re still taking things from the books. So, there’s a lot more creative freedom now, but it was really important to me in the beginning of establishing her that I was pulling as much information from the books as I could.

Are you happy to be back living in Albuquerque again and just exploring?

Yeah, I’m living on a farm this season, so my neighbors are horses and baby goats, which I love. And there’s a tire swing hanging from a tree, and I have my coffee and swing from the tire swing every morning, and I do a meditation. And I think the land here is just so magical. I feel like its sacred land, and the skies here are so big and vast. The sunrises and the sunsets are so beautiful. I just always find myself feeling my time here is very special, and I don’t take that for granted. 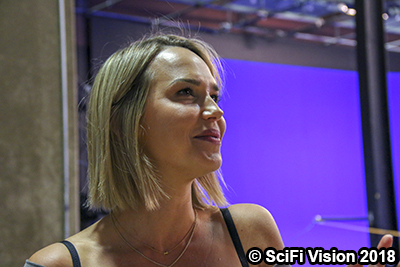 We’ve had some amazing sunsets the last week.

Amazing sunsets! And I have been riding horses again. So, yeah, it’s all good.  Arielle is very mushy compared to Olivia. Arielle is like a flower child, and Olivia whips me into shape.

It’s like you get all your aggressions out with Olivia.

**Be sure to check out the rest of the coverage of the event, and stay tuned for much more, including the rest of the full individual interviews and more set photos.**
Twitter
BotonSocial por: SocialEmpresa
Category: Interviews