Exclusive: Steve Alten on "Meg" Being Brought to the Screen, Opening Today Nationwide

The soon to be blockbuster, The Meg, opens today in theaters nationwide. The film is based on the novel Meg: A Novel of Deep Terror, written by Steve Alten, over twenty years ago. The story follows Jonas Taylor (Jason Statham), a paleontologist and marine biologist who was working in the Mariana Trench on a top-secret dive when he came face to face with a 70-foot prehistoric shark, the Carcharodon Megladon. His claims were dismissed and his career ruined, until seven years later he must confront his past to save the crew of a deep-sea submersible.

Alten recently talked to SciFi Vision in an exclusive interview about Meg and his subsequent novels in the series, as well as the upcoming film.

Can you start by telling me how you first came up with the idea for the story of Meg all those years ago? 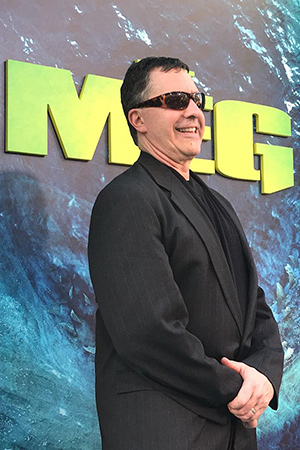 STEVE ALTEN: The idea actually germinated back when I was fifteen years old and I saw Jaws in the theaters. That made me want to go read [Peter] Benchley’s book, and then I started reading everything that had to do with great white sharks. There was always a little blurb about Carcharodon Megladon, the prehistoric cousin of the great white, usually with a picture of four or six scientists sitting in the Smithsonian.

Fast forward twenty years later. I was thirty-five years old in 1995, and I picked up an August issue of Time magazine, and on the front cover was the Mariana Trench. The Mariana Trench is the deepest part of the ocean, an unexplored gorge seven miles down and about 1500 mile long. The article talked about hydrothermal vents and life at the bottom of the ocean.

And it sort of gave me ideas. You know, what was that huge shark I read about back then? This would be a pretty neat place to put it if I wrote a story about it.

I went to the library, because there was no internet back then, and did about three weeks’ worth of research and saw that it was feasible.

And then I went to write the book. I worked on the book from ten o’clock at night until three in the morning and on weekends, and it took me about a year to write it.

Then on Friday the 13th in September in 1996, I went to work - I was working at the time as a general manager of a wholesale meat company - only to find that I’d lost my job. And I went home with no money in the bank basically. My wife was very upset, and I said, “Honey, don’t worry; this is the best thing that could happen. Now I can work on my second book,” and she about had a fit.

And four days later, Meg went out to the six-figures publishing house in the country, and buoyed by the fact that we had a first book deal at Disney’s Hollywood Pictures at the time, it garnered a two-book deal.

I know the movie has been a long time coming. Can you talk about that process of how it went from the novel to eventually becoming a film?

The book was originally optioned by Disney’s Hollywood Pictures, and they went through two subpar scripts, and the president of the studio lost his job. That reverted the rights back to me.

So, nothing happened for a few years, and then in 2004 a friend of mine, Nick Nunziata, who was the founder and creator of CHUD.com, which stands for Cinematic Happenings Under Development, showed the book to his friend Guillermo del Toro, the director of Hellboy, and the producer, Lloyd Levin. They optioned the project from me for a dollar and had me write the screen play, which I worked on with Jan de Bont, the director of Twister, who was attached.

Once that was done, they took the package up to Newline Cinema, and they optioned it, and they attached a new screen writer, who really butchered it. He wrote his own story. He really didn’t pay any attention to the source material, and thankfully that deal did not go through.

For two years they did not accept his script, and eventually the rights reverted back to me.

I took it immediately to producer Belle Avery, who I’d met, and she loved the book, and she sought to get it infinitely financed, which she did.

It took about eight years, and she worked with Gravity Pictures, and they brought the package to Warner Brothers, and that’s what finally got it on the right track.

I know this time someone else wrote the script again, but did you have any influence to make sure they stayed faithful this time?

What happened, was after New Line reverted the rights back in 2008, Belle and I wrote a script ourselves, and she took that out to get financed, and so that was the source material that was eventually turned over to the new screen writers at Warner Brothers.

So, they used your source material this time, but can you tell me kind of how faithful though they remained to your original idea? Sorry, I’m not sure exactly how that works when someone rewrites the script.

There were some subtle changes here and there, but for the most part, it follows the book.

I don’t know if you’ve seen a finished version of the film, but for at least the parts that you have seen, what has it been like to see your creation come to life in that way? Because that’s got to be a really awesome experience. 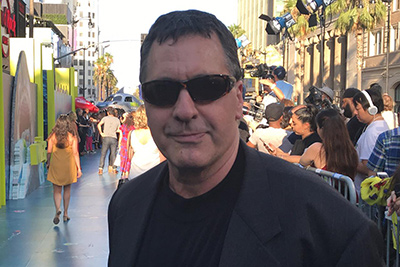 Well, I haven’t seen the final product yet, but I’ve seen the trailers like you probably have. The trailers have the right tone, the right cast, and the right shark, which is really important, because over the last twenty-two years, people have tried to screw around with what the shark looked like. That’s a no-no; you can’t do that, because we pretty much know what the megladon looked like, and they got the creature, the shark, right in the trailers and the movie.

But as far as how exciting it is, it’s really exciting, and it’s, you know, very humbling as well.

Were you involved much in the actual filming process and things like casting?

No, I had no involvement in that, but when [I found out] Jason Statham got cast, I got very excited, because I thought he was perfect.

Have you seen any more of the film other than the trailers, or is that all so far?

Shark Week had something on their megladon special, and that was what Warner Brothers gave them, a sneak preview, and that was great to see. It was a great clip.

The effects look really good from what I’ve seen.

I’m assuming your novel would have been cut down for the film. What’s your favorite scene that was from the novel?

I will let you know after the premiere in Los Angeles.

[laughs] Yeah, I guess it helps when you’ve see it. What part are you most excited to see?

I will let you know after the Los Angeles premiere.

[laughs] Okay, but you are going. That answers my next question.

Do you have any plans at all to make any of the subsequent books into films? Has there been any talk about that?

Well, I hope so. I hope they do them all.

You know, with any movie in Hollywood, if the movie makes money, then they are more apt to do the sequel. But things are looking very well. So, I don’t want to jinx it, but a lot of people are very excited about the movie.

After the movie premieres, are you intending to post things on social media like people sometimes do, like behind the scenes tidbits or what have you?

Well, I’m pretty active on Facebook. I’m not that active on Twitter, but I do tweet every once in a while. But sure, the social media spots for Steve Alten will be lit up around the time of the movie.

Do you have any other books that are coming out that you would like to promote?

Well, the first one is the Meg movie edition, which is out this week in trade paperback with the movie cover as the front cover. And that has an unpublished prequel in there in the back called Meg: Origins. And it has eighteen different images that were collected over the last twenty-two years, so that’s a really great way to read Meg. 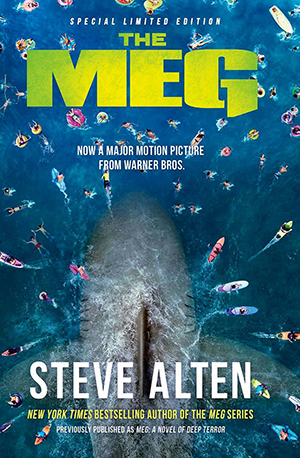 And the sixth book in the Meg series, Meg: Generations, is on sale only on my website stevealten.com, and that was done especially sort of to honor the “MEGheads” who have stuck with me the last twenty-two years.

And you have a seventh you’re planning to write?

Yeah, I haven’t started that yet, but that will be Purgatory.

Is there anything else you think your readers would like to know that I can include?

Well, if you want to get in contact with me, you can get my personal email at stevealten.com, and there’s a little link that you can click on to email me. And for twenty-two years, I’ve answered every email personally.

Wow. That makes me wonder, in all that time, do you have a most memorable letter or email? Just one that really stuck out?

...There was actually a letter that stuck out that I received after Meg came out, and it was actually a really nasty letter, but it was very well written. And I replied, and I said, “You know, it’s a shame. You come off as sort of like a frustrated author who never got his break and is angry at me that I got mine. And it’s a shame that you’re so hostile, because I would love to hire you as an editor of my sequel The Trench.”

He wrote me back, and he was very apologetic, and he said, “I am a frustrated author. I am a little jealous, but I would love to work as your editor.”

So, I hired him, and he did a fantastic job on The Trench. And I honored him; I acknowledged his contributions in the acknowledgments, and it turned out to be a great opportunity for both of us.
Twitter
BotonSocial por: SocialEmpresa
Category: Interviews