Karl Yune, who's known for such projects as Memoirs of a Geisha and Speed Racer, will star in the film Real Steel, which opens this weekend.

The movie is set in the near future, where the sport of robot boxing has become mainstream. Charlie Kenton (Hugh Jackman), an ex-boxer, finds a discarded robot he hopes can become a champion, which he uses to get closer to his estranged son (Dakota Goyo). Karl Yune stars opposite Jackman as Tak Mashido, the man who is responsible for bringing the sport mainstream, as well as Kenton's opponent.

Yune recently sat down for an exclusive interview with SciFi Vision to talk about the new film. 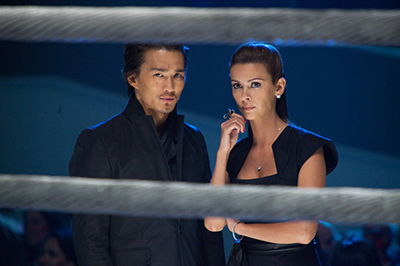 Yune explains that while the film is about robots, it's more about the characters. "The backdrop of the film, the atmosphere of the film, is this world of robot boxing. But really, Real Steel is a film about heart and reconciliation between a father, played by Hugh Jackman, and the son he abandoned at birth. Hugh Jackman's character is an unscrupulous, washed-up ex-boxer in a world where boxing is obsolete and what's become relevant is an underground sport that has now become a mainstream obsession - robot boxing. This is the world these characters are navigating, and along the way Hugh's character has to reconcile with his past failures and potential relationship with his son who hates him.

"This film really does give you everything, and I'm not just saying that because I'm in it. It will stimulate your emotions on all levels, it will question your sense of competition; it's got the under dog story. It will make you question your own sense of morality. It's entertaining; you'll be surprised. You'll laugh, cry, and cheer.

"Tak Mashido is the living legend of this sport, of robot boxing. He's a mysterious character, the reclusive legend, or the reclusive genius of the robot design world, and he is responsible for unintentionally taking the sport from underground to main stream obsession."

After Yune got the script, he went through multiple auditions. "I met with casting, I met with Richard Hicks, the casting director, and he put me on tape, and then about a month later I met with Shawn Levy, and I read for him. I guess they had a short list of actors that they were considering for the role. I guess it was another two weeks later, I thought it was my insurance broker at the time, I don't know, but I saw a local number and I picked it up and it was Shawn Levy. He was like, "This is Shawn Levy. Congratulations, you got the part, and I have to share this with you: Steven Spielberg is a fan," as ludicrous as that sounds. So he said, "Steven Spielberg is a fan. He picked you out of the lot; he really liked you." So this would be the second Spielberg production that I'm working on."

Yune's part got bigger as the production went on. "The one thing that I found to be very interesting and refreshing was that Shawn Levy is a fantastic director. He really encouraged me to just go there, to really go all out as far as, you know, executing each scene, and pretty much he gave me full creative freedom, and it was a constant surprise.

"...In the script Tak Mashido's character was very small, and throughout production I found they were expanding my role and writing in new scenes. That was really rewarding in the sense that I felt like it was an acknowledgement from this caliber of people of what I was bringing to the table.

"...Tak Mashido is just a really cool character to play. I mean, the guy is like this mysterious legend and celebrity of this sport. You know, I myself am a pretty humble guy. I wear jeans and T-shirts and drive a Prius, but this character has got the coolest wardrobe and drives the flashiest cars. In the film he drives this suped up Tesla, and it's just really cool to play the character."

The car was not the only cool prop that Yune got to work with. In fact, there were some he was able to take home. "There was a bunch of prop magazines with me on the cover in character. You know, magazines like Wired and Time and stuff like that...

"When we were on the set in the arena part of the set they were very good about securing the props because there were like 3,000 extras and all of them were given props that had to do with the movie, like magazines or Real Steal paraphernalia, stuff like that. So I did get a nice production gift, which was all of those magazines framed."

Yune enjoyed working with the cast. "As far as the cast goes, forget about being an actor, Hugh Jackman's just one of the most authentic human beings that I've come across, just in life in general. The one quality about Hugh is that, here's this grown man who knows how to have fun, and when I was in scenes with Hugh, I literally felt like we were a bunch of kids playing and having a good time. So that was really nice.

"And Olga Fonda, who plays my partner in the film, is just a big ball of humor, and she definitely was someone that helped me play, someone good to bounce off of. She was very generous in that sense.

"Overall in the entire production, I'm involved with people who are at the top of their game, and that really fostered an atmosphere to really just be in the moment and enjoy being an artist.

"...I did have a scene with Evangeline [Lilly], but not together, we were at the same fight, the same finale, where Atom fights Zeus. She was cheering for Atom and I was obviously cheering for myself and Zeus."

The film has a good bit of special effects. "There was a lot of green screen at times; there was a lot of motion capture. We used real boxers to motion capture the choreography and action of the robots. Sugar Ray Leonard, one of the icons of boxing history, choreographed all the moves. He choreographed it not just authentically, like real boxing moves, but he incorporated some fantastical moves that he's actually wanted to use. Sugar Ray was a pretty fantastical boxer as far as the moves he did. He had an opportunity to incorporate some of that, and he was telling me on set that he had a blast doing that. This film is pretty much like the byproduct of real veterans, in all crafts, just having fun.

"...For Charlie Kenton and Max's robot, Atom, [the] robot shadows them. My robot is so badass that he's fully autonomous. At one point though, near the end of the film, I start to feel as though there could be a threat to my flawless record, so I actually switch him off full autonomous operation and take over the controls, and so I'm fighting him at the controls."

Yune thinks that sometimes it is easier using green screen. "It's just one of the methods used in film making. It requires more imagination, obviously, because you're acting to nothing, but I didn't have a hard time with the green screen at all...

"Sometimes an actor that you're working with is not going to be available for that particular scene, so you're reading with someone. For example, they'll pull a grip and have them read your lines, so for me I'd just prefer to have nothing at all. Just rely on my imagination." 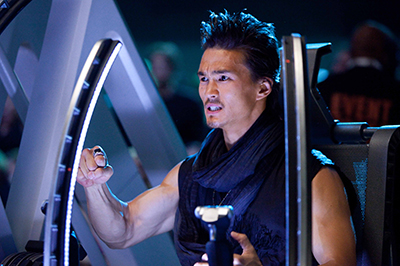 Yune loves all his roles and doesn't really have a specific dream role. "I guess I'm just a kid; I don't think that far ahead into the future. Whatever gets thrown my way, I always find a way to see the fun in it... I'm just kind of all about what I'm doing right now."

However, according to Yune, Real Steel is his favorite movie he has filmed to date. "I've been fortunate to work on a variety of different kind of films - thrillers, period pieces, sci-fi, all that stuff. But this film, the level of humanity that it captures, which sounds ironic, because you know, it's about robots, but the level of humanity that's in the story, it really makes you question your own sense of what's right and what's wrong and how much heart you have.

"It's not so ironic though, when I said about the level of humanity that this film captures. It's not so ironic, because [Charlie's] son, Max's robot, Atom, the robot actually, you start to feel, because it's connected to [Charlie and Max]. It's got a function in which the robot operates; it's called a "shadow function." So because it's shadowing the person he's with, you start to get a sense that the robot has this level of humanity. It's just a really interesting and deep film. You're going to be more than surprised."

The actor learned quite a bit from working on the film from everyone in the production. "From Shawn Levy, I learned how motivating and powerful enthusiasm is. Shawn Levy is probably one of the most enthusiastic directors that I've ever worked with and he really just knows how to get consumed in the fun of what he's working on. His ability of being in the moment, followed by how enthusiastic he was, was a delight to see. I learned a lot actually, I could go on and on."

Yune would like to return to the theater at some point. "I'd love to take the time to go and do some theater. Every now and then I'll go and do a short play at some of the local theaters in Los Angeles. But as far as getting involved in a full on production, that's something that I really want to do and plan on doing, in the near future."

Yune has some more projects coming up. "I'm shooting this independent film in Mexico called Little Boy. In the film I play a Japanese sword master. This one is a period piece set just after World War II, and oddly enough, it's another film about a boy reconciling with his estranged father."

Real Steel opens this weekend in theaters across the country.

To find out more about Karl Yune, be sure to check out his page on IMDB, or visit one of his Facebook fan pages.
Twitter
BotonSocial por: SocialEmpresa
Category: Interviews