Exclusive - Jack Kenny on the Third Season of "Warehouse 13"

One of Syfy's hottest summer series, Warehouse 13, which follows a team of agents who locate and return mysterious artifacts with strange powers to the top-secret warehouse they protect, will be entering its third season next month.

Last season left fans questioning what was to come of the Warehouse team as Myka Bering (Joanne Kelly) chose to leave for good. There was also the question of whether fans would see the villian H.G. Wells (Jaime Murray) again.

This season, a new character, young ATF agent Steve Jinks (Aaron Ashmore) will be joining the team and will become Pete Lattimer's (Eddie McClintock) new partner. What will this mean for Myka?

Recently, executive producer and showrunner of the series, Jack Kenny, sat down with Jamie Ruby of SciFi Vision for an exclusive interview to talk about the upcoming season of Warehouse 13, which will premiere July 11 at 9pm ET/PT on Syfy.

Kenny talked about how he first became involved with Warehouse 13. "Well, it's interesting. I was directing an episode of an ABC Family sitcom called Roommates. And Eddie McClintock was friends [and] went to high school with the guy who created the show, Chris Case. And I was directing and I've known Eddie for years since I was a writer on Holding the Baby.

"So Eddie and I were hanging out and one day he said "Hey, my show just got picked up." And I said "What show?" He said "Warehouse 13," and I'd heard about this from my friend David Simpkins. So I called him to congratulate him and say "Hey, congrats on the show" and he said, "Yeah, they're looking for a showrunner." And I said, "Really?"

"And my next call, of course, was to my agent. And I said, "You know, I've heard a little bit about this show but get me a copy of it; I'm not terribly well-versed in the sci-fi universe; I'd love to see if it's anything I could get involved with."

"And I watched it and I thought 'Oh, this is a show about characters and family and connections and character-based humor and action and adventure. I can write this.'

"And so I went into Syfy and I sat down with them and I told them what I thought of the show. I told them what I thought its strengths were and I said, "You know, I think this could be your crossover show. This could be the show where it's fun if you're a sci-fi nerd, or if you're a sci-fi geek and you're really into it, that's a lot of fun, but you don't have to be. You can actually enjoy the show the way the average person enjoys Back to the Future or Indiana Jones or Star Wars. Because it's about characters and it's about people, it's not all about jargon."

"The other thing I said to them at the time is "I think Artie's (Saul Rubinek) going to need somebody to play with, because otherwise he's going to be on the phone all the time in the office, sending them off on cases and just sitting there. So he needs a sorcerer's apprentice." And that's how we came up with Claudia (Allison Scagliotti).

"...I just recognized right away for myself that...all the shows I've ever written have always been about family, in some way about family. And this show to me was very strongly about family." 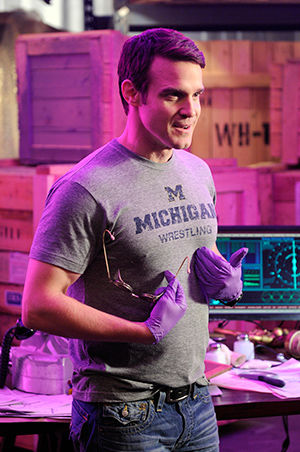 The long hours are the hardest part about working on the series for Kenny. "I think the hours are pretty tough, especially when I'm up in Toronto, which I am a lot. I'm there for probably 80-85% of production, I'm up in Toronto. And there's long hours. And there's always a lot to do; it's a big job. I'll always be writing outlines and scripts and watching vis effects, and watching cuts and giving editing notes. And amongst all that I'm on the set watching performances and there for the actors, to help them out...

They were just wrapping up episode nine at the time of this interview.

The tone of the season this year will be focusing less on romantic relationships and more on family, according to Kenny. "This year we're leaning more heavily into the sense of family and the family hanging together, because of where we're taking the season. We're taking the season to a very interesting place this year and a lot of it is about how our pasts impact our present...We're learning a lot about what happened in all of our characters' pasts and how it affects how they behave now.

"And that's with everybody, everybody gets to explore that a little bit.

"And actually it's also an overall theme for the Warehouse, how the past of the Warehouse is going to impact its present."

The show will also be taking bigger chances with every episode. "I think we're doing a lot of really extraordinary things, like there's an episode where Pete and Claudia have to go inside a video game to solve a mission." Another interesting episode this season is "sort of a Die Hard episode, where they're trying to save a building from coming down."

Many fans are worried about Mika's fate. "I can say to the fans is don't worry. Don't worry! It's going to be fine. And like I say, at the end of the first season we killed Artie."

The other thing that will be different, is that there is an addition to the main cast. "The characters come back on the show, and we know there's a new guy, because the first episode is titled "The New Guy." And Aaron Ashmore is coming on to play the new Warehouse agent. And he and Peter go on the first, you know, sort of artifact hunt together, which is kind of fun."

Ashmore's character is Steve Jakes. "He's a former ATF; he has this innate ability to be able to tell when somebody's lying. It's something he sees in their eyes, if he looks into somebody's eyes he can tell if they're lying, which makes him kind of valuable for the Warehouse.

"And I can also tell you he's a magnificent human being, I love working with him. He brings a whole new rhythm and color and tone to the Warehouse gang, he's just a lot of fun to be around.

"And he kind of plays a straight-laced guy, which is fun for Pete to go up against. He doesn't have much of a sense of humor, which of course drives Pete insane.

"And so it's just pretty fun. They have a really good time together, Aaron and Eddie. And...he's going to end up becoming besties with Claudia."

"We have Ashley Wiliams...She's coming on to do a season arc."

Some other guest stars that will be appearing this season include Allesandra Torresani, Jeri Ryan, and Sasha Roiz.

There is also going to be another Eureka crossover on the show. "We're going to see Fargo!...We couldn't unfortunately cross over to Eureka because their season was shot way before ours was...Just in terms of productions schedules, we couldn't make that work, because everything they had shot for this summer was already in the can before we started production."

Kenny has a few dream guest stars he'd love to see appear on the series. "There're so many wonderful actors. That's a tough question, there're just so many fantastic actors out there. I want to have David Hyde Pierce on. He's a friend of mine and I think he's brilliant. I also would love to see Leonard Nimoy come on our show. I think that would be fun.

"There's so many actors that I love, because I love actors....We almost had George Romero do a part this year but he didn't want to act; he wasn't interested in acting. I was kind of sad about that because we're doing an episode that has sort of a zombie theme. It would have been fun to have George Romero in it. 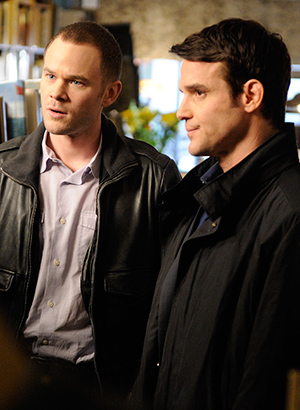 Kenny himself though is not interested in acting on the series and will stay working behind the scenes. He wrote the premiere for this new season. He also directed last Christmas's episode and will again be directing this one. "We're doing, once again, an out-of-sequence, standalone Christmas episode this year – I am so in love with this story that we're doing, I can't wait."

When filming, the actors mostly follow the script that they are given, but there is always some room for improvement. "They follow the script pretty close and pretty tightly. I'm there because generally I'll come up with other stuff. Sometimes every once in awhile one of the actors will say, "This line is tough for me to say," or "I think there's something better I can say here," or "Can you help me out with this?" That happens sometimes, but more often than not, I'll jump in and just say, "Hey, try this instead," or "Hey, let's do this."

"Eddie and I have a great rapport. I have a great rapport with all of them; we're always coming up with new and different stuff to play with. And because I'm an actor, I also kind of speak the actor's language, so I have a good time talking to them about the emotions of a scene, the objectives, reminding them where they're coming from, what they've done in this episode, that sort of thing.

"But we do improv jokes and stuff together. We have a really nice rapport that way; we come up with cool stuff."

Due to time issues and such, there are always things that have to be cut out of the episodes. "Every episode you ever shoot is always long, because you have to shoot it long. You want to be able to tighten it up and make it move like lighting.

"There's always a scene or a moment in an episode where you go "Oh, I'm sorry to have to cut that, that was a fun bit. But they usually put them on the DVD. But there's always stuff in every episode where I go "Aw, I'll miss that."

Warehouse 13 always has great props for artifacts, but Kenny is hard pressed to choose a favorite. "I don't have a favorite, I truly don't. I think there're so many cool artifacts.

"Every week Franco De Cotiis and Kerry Spurrell – Franco's our production designer – come up with something that I just marvel at...There's just one cool thing after another.

"And then they built a golden beehive from Warehouse 2 this year that was absolutely a marvel to look at.

Kenny does, however, have an idea for an artifact that he would love to see on the show. "Since Day One I've been talking about Hitler's microphone. I just haven't figured out how to work it into a story yet.

"But everybody, every writer – and every actor, for that matter – has got an artifact that they want to see on the show."