The Anthem is a unique stage production coming to the Lynn Redgrave Theatre this month. The original musical was inspired by the Ayn Rand novella with a book by Gary Morgenstein, music by Jonnie Rockwel, and lyrics by Erk Ransom. The sci-fi musical, directed, choreographed, and designed by Rachel Klein, takes place in the future where individuality is illegal.

Jenna Leigh Green, who plays the part of Pandora, recently sat down with Jamie Ruby of SciFi Vision in an exclusive interview.

The play is only loosely based on its predecessor, according to Green. "The show is very, very loosely based on the Ayn Rand novel The Anthem, but we are definitely taking somewhat of a farcical, over the top sci-fi twist and throwing that on top of it. The show is going to be an explosion of flash and sparkle and glitter with one very structured world and one very fantastical world. And just taking a very tongue-placed-firmly-in-cheek at this world." 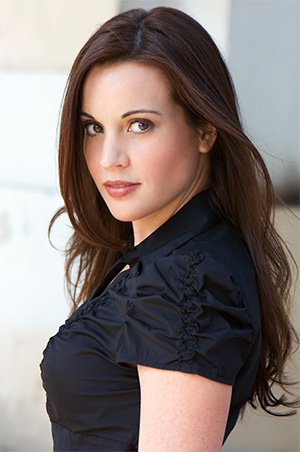 Green talked about her character. "There is a song called "Pandora's Box." I am Pandora and I am classified as First Citizen in the world that we live in. This world is very much a futuristic Hunger Games meets Divergent meets Xanadu. That's the best way to describe it. It is set a thousand years in the future, but we are also somewhat stuck in what looks like the 80s. In this world we all live on the grid, and everyone's monitored, and there is no individuality; it is illegal. And First Citizen Pandora is in charge of this world, so she is the ruler of the grid, and she makes sure that form and order are always in place, not always with the softest of hands. But at the core of her, she is also struggling with whether or not the rigidness of her rule is relevant anymore and if the possibility of change is in the air."

When Green was offered the part, it sounded like a fun opportunity. "The creative team reached out to me about the project. I had actually heard about it a little bit before I came to the decision that I was going to do the show, and it just sounded like such a unique, interesting idea, and it also sounded like a lot of fun. We all want to be a part of something that is cool and innovative and thought-provoking, but at the same time, when it can be something that sounds a lot of fun, that's just an added bonus. I was told of some of the creatives on board and also a couple other cast members who had come on board, and I could tell right away just from the people involved that it was going to be something really fun, really interesting, and a wild ride, and I said, "Yeah, let's do this.""

At the time of the interview the cast was in the third week of rehearsal. "Our first week was spent solely on music, and our second week was spent on the big production numbers and setting and staging choreography. Now we've just started moving into scene work, so we're definitely taking it step by step. And as this is a brand new show, never been seen before or heard before at all, things are constantly changing. The show is evolving daily, so we're coming into rehearsal each day and being handed new pages. They've changed the lyrics to a song or a scene has been restructured.

"So it's been an interesting process and an exciting process, because the writer of the show, and our amazing director, Rachel Klein, have set up this environment where we feel like our opinions are very welcome and our thoughts are heard. So as we've been exploring, we've had questions and thoughts and comments and everything has been incorporated, which has been wonderful. We're able to have a very open dialogue about where the show is going, what the message of the show is, and who each individual character is. So the show, just in the first three weeks that we've been working on it, has been changing quite a bit.

"So it's hard to say exactly what it's going to be by the time we open, but we move into the theater next week, which is unheard of, to have three full weeks of rehearsal on the stage you're going to be working on. I've never done a show before where we got so much time in the theater on the stage. But we do have three more weeks, which is a ton of time. Normally you get a spacing rehearsal, maybe a run through, and then you start tech. So the fact that we get to spend two weeks in the theater on the stage before we even start tech, is an absolute blessing. We're so excited about it.

"We also have a lot of aerial work in the show, which makes it necessary for us to move into the theater, because the apparatus that is being used by our aerial performers, who are brilliant, have to get time on it. So that's another reason why we're moving into the theater early. But the show visually is going to be stunning."

Green is a fan of science fiction. "The world has definitely always intrigued me. My mother is a big fan of sci-fi, so I grew up around shows that she watched. And I've always loved and been drawn to the fantastical world and the future. I love futuristic-type TV shows and films and stuff like that. It wasn't necessarily something that I sought out, but when those types of projects came my way, and I had the opportunity to join, it was always a little bit extra exciting to me, because I always have been fascinated by that world."

The actress talked about some of her favorite science fiction shows. "I've always been very intrigued by things that are somewhat supernatural, so those types of shows [I watch]. I don't necessarily have one in particular, but Nell Scovell, who created Sabrina, has an amazing show she's worked on for years called Warehouse 13, which is a great show. But then also Supernatural the television show and Teen Wolf, just lots of things that have very supernatural-esque qualities to them, I really enjoy."

Green talked about the process of choosing her roles. "It's not always necessarily my choice; as an actor, it's a constant struggle to keep working and to keep yourself busy, and there are lots of projects that we would love to be a part of that don't happen. For the most part I'm usually auditioning for things and hoping that something I really respond to feels the same way about me. I just look for fun things, if something sounds intriguing and interesting. The goal is to love what you do and to do what you love. So for me, if I can find a project that the people in charge think that I would be great for, and it's also something to me that sounds like I'm going go to work every day and really enjoy what I'm doing and enjoy the people I'm working with, that's the clincher for me, because that's I feel like the goal of everyone, no matter what line of work you're in, if you can go to work and really, truly love what you're doing every day, then [you can be] completely happy."

The actress doesn't have a specific dream role in mind for the future. "I wouldn't necessarily say I have a type of role, because there's so much that interests me. But I would love to do another series; that would be great. But as far as being here in New York and the theater medium that I'm working now, years ago I had the great fortune of originating a role in a show that kind of became a bit of a favorite all across the country called Bare. I would love to get to do that in a show that actually moves to Broadway, to originate a role."

The actress has worked on Broadway before and really enjoyed it. One of the shows she worked on was Wicked. "Oh, it's amazing. Wicked is by far one of the most successful shows of all time and I got the opportunity to do that show all across the country and in Canada as well as playing here in New York on Broadway, and then I got to open the Los Angeles company of the show which was amazing, because that's where I'm from; it's my home. So getting to open a show like Wicked with the original company in Los Angles was a dream come true.

"Every friend I've ever had, every family member, everyone, was able to come see it. Being a part of something so huge is somewhat terrifying, but at the same time, every single night when you go out there, it's just exhilarating to hear the response and to see – there would be hundreds of people at the stage door and little girls dressed up like Glinda or dressed up like Elphaba, and seeing families coming and experiencing the spectacle of it all was really something that is going to be tough to match in terms of another exciting job that I may or may not have at some point."

The actress also took part in the off-Broadway parody production of Twilight: The Musical, where she played a multitude of characters, from Rosalie, to even Hermione (Harry Potter). "It was very fun, but I felt a bit as if I was running around with my head cut off. The show was a very small cast; it was meant to be somewhat of a sight gag where you had actors running off stage as one character and running back on stage as another. Throw in the aspect of trying to physically change for each one. It was almost a sight gag to have my running on still fixing a wig. And the audience went right with it; they knew exactly what was happening, and they thought it was hysterical. There was sometimes applause when it would happen; there would be three lines of dialogue between me running offstage and running back on as a different character. But I had a blast; it was a lot of fun."

Meanwhile, Green has two new films coming up. "I have two movies that I've finished that I was lucky enough to have supporting roles in. One is called Hard Sell and Katrina Bowden and Kristen Chenoweth are two of the stars of it, and it was a lot of fun. I had a small role, but we had a great time filming.

"The other film is called My Eleventh, and John Benjamin Hickey is the star of it, and he is brilliant. He's on The Big C as well as being a fantastic Broadway actor.

"And being on that set was just incredible. It's a very intense, sort of psychological film. Dark, very dark. It's already filmed; it's done, so they are hoping to get it distributed hopefully sometime this year. It's a very dark movie that was really fun to make."

You can watch Jenna Leigh Green in The Anthem at the Lynn Redgrave Theatre for the preview show Tuesday, or after the official opening, starting Thursday, May 29th.
Twitter
BotonSocial por: SocialEmpresa
Category: Interviews