The second part of the press room for Lost Girl was interviews with Kris Holden-Ried, who plays Dyson, and Ksenia Solo, who plays Kenzi. Again, the two actors could not reveal much of what is coming in season four, but they did have some great things to say.

Here are some highlights, or you can watch the full video below. There are quite a few funny parts I've not included in the highlights below, so it's definitely worth a watch to see the two joking around. 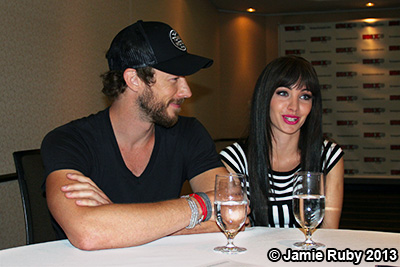 On the theme of family continuing in season four -

Kris: In season four we do a lot of twisting and turning with relationships. I mean definitely our core group is even stronger than ever, and that's one of the nice things about Lost Girl, is that we don't play a lot of sort of cliche fractal relationships, sort of, "Oh, I hate you now," oh, you know, it's not very soap operaesque; it's more like we are a team and we always have each other's backs.

Ksenia: But it's like as a real family goes through, the struggles and bumps in the road. We do that I'd say tenfold in season four, and some relationships are tested. There are some secrets people have and have to share, and so we get to be like a real family, and not just - things aren't perfect all the time. We get to grow and evolve and that's the beauty of all these characters and the family dynamic we have.

On what fans can look forward to in season four -

Ksenia: It's a very cool season; we're very lucky, we have great guest stars this year.

Kris: ...We do have a lot of good stuff, like we said earlier, there's a lot of new dynamics that are brought in, you know, the love triangle really gets tested, and then spun, and then I don't know if you'd call it broken, but things, different elements and forces are introduced...You know we introduce a new sort of fae hierarchy and that sort of raises the stakes. What's nice is every season we sort of push the mythology into a new level, and the world sort of keeps expanding. And this year we're able to introduce a whole other sort of hierarchy that we weren't able to talk about before, and it's an old world sort of power. Yeah, we have a lot of fun this season.

Ksenia: Yes, I mean they're bonded for life. So no matter, through Hell and high water, they're bonded for eternity, or for as long as Kenzi's alive (laughs)...I mean because I'm a human and don't live as long as the fae...And season four, it begins in a very strange way, because Bo is missing, so we really see a different dynamic with Kenzi and with all the characters.

Kris: With all of us, we all have to sort of adjust and change.

Ksenia: And you know Kenzi's on her own, and she has to - she's always had Bo by her side and they've been survival pals, together, and now she has to almost relearn how to survive on her own, and without Bo there to protect her, she's in danger every single second, you know, because the unimens want to kill her, because claimed humans are now considered terrorists. So it's a really kind of scary dangerous place for her to be in. And thank God she has her friends and family to protect her, but at the same time she makes a lot of decisions that get her into trouble and alter her universe in very specific ways, and then Bo comes back and they go through their own challenges and grow and their relationship develops as well. So that sums it up without giving too much away.

Kris: We turn it on its head in the beginning, and then we kind of come back and find it again. And that's all we can say about that.

On how much time takes place before season four -

Kris: Not much...season four picks up shortly after season three. 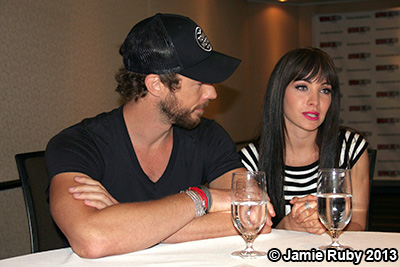 Ksenia: We have so many incredible fans all over the world, and we are so grateful for them. And you know, for me, I was very new to Twitter. My cast mates had been on it for quite some time so it took me a little while to get on the Twitter train. And now that I have, I feel like my life has changed, because I get to you know share a bit of myself with our incredible fans, and they've been nothing but supportive of me and the causes that I support and fight for in my life. So that's been just an incredible kind of addition into my life that I didn't have before. And the love that we get on a daily basis, being able to interact with all these incredible people, it just makes your life better, you know?

Kris: Absolutely. I mean both professionally and personally Lost Girl's been a great gift - it's raised our international profile professionally, but also personally it's given us a great group of people to work with; it's given us some security. As actors, you know, it's always looking for your next gig, and this has been a nice home to live in for the last four seasons and hopefully for the next one.

Ksenia: And we're lucky that we all get along as well as we do because...we're stuck together twenty four hours a day basically, so it's nice that we really are a family off set.