The first press room SciFi Vision attended at Fan Expo was for Lost Girl. First up was Anna Silk, who stars as Bo, the succubus. Although she could not reveal much on season four, she gave some great insight into the series.

Here are some quotes as highlights, or you can watch the whole video, below.

On the possibility of Bo going darker this season - It's been nice to kind of explore the dark side and I think that that's an integral part of Bo, and her history, and her future. I mean, it's not solely that, but I think it's a key part of who she is. Yeah, you'll see more of that. 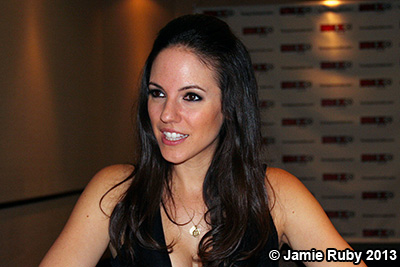 Anna could not reveal whether we would see Bo's father in season four, but she did confirm we would see more of her backstory.

On the theme of family still being a part of the series - Everyone does come more together every season that we have. This is her fae family. I mean, this is her family, whether they are really related to her or not. She's kind of found this family, and so she protects them like a family, and fights with them like a family and all of that stuff...but they're definitely close and she feels very protective of them for sure, and that continues. Whatever chaos is going on, Bo is kind of the - do I say the voice of reason? Is she? I don't even know if she is...Sometimes she needs it herself and sometimes she is that. Sometimes she is kind of the center of that world. I mean, these people and these fae beings have been there to support her and protect her. So the theme of family continues for sure.

On why she couldn't really talk about season four - You know why? It's because there were so many cliffhangers at the end of season three, and we have to let those play out. That's what we kind of want to reveal to you guys; we're really excited for you guys to see the season. I always try to come up with something to say, and I came up with something to say that's a little bit lame, but it's true, which is to literally take everything you think you know about Lost Girl and turn it upside-down, because there are a lot of changes. There's a lot of - you know how season two, at the end, we all kind of came together. At the end of season three we've all been taken apart. So season four really has to pick up those pieces. That's why it's so hard to talk about, because you give away storylines as soon as we start talking about how those cliffhangers are resolved. But everyone's back and everyone's back in a big way, and it's a crazy season.

On coming back to work after being pregnant and doing action scenes - Well it's definitely harder because you're not as physically strong, but I'm getting stronger. Actually now that I'm at this point in this season I feel a lot stronger. And I've been doing some action and getting some action (laughs), which is kind of funny, because I'm like, "...I take it as a compliment that you think I can now kick butt and have love scenes and that kind of thing," but it's definitely been a challenge, definitely a new challenge. But I feel good; I feel strong, getting stronger. 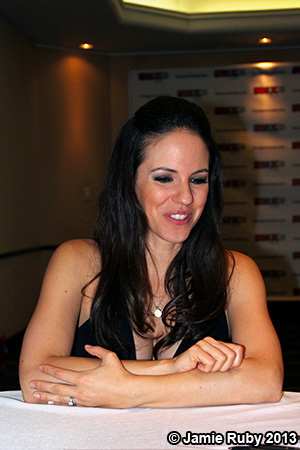 On being able to transition from work to home life - It's difficult. Yes, I've always heard people say like "leave work and then go home and be fully at home," and I'm trying to do that, but it's definitely a challenge. But Sam helps me; he plays Dyson a lot like when I'm learning lines. My husband's downstairs, and I'm upstairs with the baby, I have to be working and I'll say, "You play Dyson," and I'll literally go through and I'll make him say all the Dyson lines or all the whoever lines, but he does a very good Dyson, I have to say. Good growling.

On fans having theories (including about the casting of Bo's father) and what they know as actors - The writers and the producers like to keep a few things secret from us, which I like, but there're certain things you need to know as an actor playing the part. You know, you need to know what you're arcing for the season, so that you can have a better idea of how to approach it. So I haven't read about who they are theorizing about casting. I have no idea who people would like to see cast, but we know as much as we can. I like to know a lot because I like to know how to arc the season.

On how her life has changed since before Lost Girl - I mean, to cover the basics, I have a job, doing something I love, which is like the ultimate gift. So that's the basic thing that's changed is that, but in terms of the creative side, and artistic side, I mean, to get to develop someone, to get to play someone else for a while, and to get to bring myself to it, it's challenged me as an actor, as a person, and in a really big way. And then just to get to work with all these other creative people. I mean, the people in our show are so talented - the cast, the crew, the art department. You walk onto a set where the detail is incredible. You know, if we're shooting in a post office, every stamp would have writing on it in fae language. I mean it's incredible, and you just walk in and think, wow okay, I have to bring my A-game, because people are bringing theirs. So that's changed in terms of just this incredible feeling of walking into work every day. What else has changed? It's great to meet people on the street that love the show. Not so much when you're nine months pregnant, which happened to me a couple times, surprisingly. But, you know, that was nice too. Lots of good changes.

On if she could write her own story for the series - I always like heavy drama, so I would probably craft a pretty dramatic episode. I think that, I know I've said it before, but I would love to see what she's capable of, what her powers really are. So I would probably craft an episode around that, exploring that. It would be good, I should suggest it. I should write an episode.

On the possibility of working behind the scenes as director or writer - I would love to, you know, I think the prep work that directors do when they come on our show is incredible. If we have a director to our show, they'll come on and say like, "I've seen every episode," and they'll literally watch every single episode, have read every script that we've done this season. The prep is incredible. So I wouldn't have to do that I guess, because I know the show really well, but I think it would be really cool to direct an episode. Writing I don't know if I would be very good at. Maybe one day. 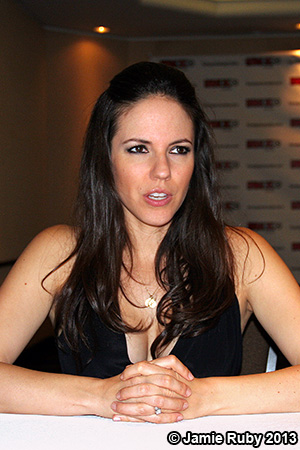 Would it be a Bo-centric episode or would she step back to focus on other characters? - Probably the second, but it is Bo's world essentially, so she has to be in there somewhere, but I think that would be really cool. Maybe, maybe season five, maybe.

Bo struggles with fae politics – can she ever master them or does she not want to? - I think that she would never want to master the politics of the fae world. A big part of our show is this divide between light and dark and the politics that surround it, and a big part of Bo's being, actually the very essence, is that she will not choose a side; she won't align herself. So, you'll have to see season four, because it's definitely explored.

On the love triangle - I think the love triangle is always part of our show. The Byson - Bo/Dyson and Doccubus , and that continues to evolve, you know, that triangle is sometimes an equally sided triangle, sometimes it's [not]. It's always going to be a center to the show. Which, I mean, it was like that from the start, but I don't think they realized what an impact that triangle would have and the fan base and the popularity particularly of Doccubus, and so we're really proud of that triangle. Yeah. You'll see more...(someone mentions Tamsin)...There's a Valkyrie in there too, could it become a square? I don't know (laughs) I don't know. But yeah, she's pretty great.

On the series premiering - November season four premieres, so I hope everyone watches and loves it like we do.