On Friday, October 9th, the first press room at New York Comic Con I attended was for Colony and Mr. Robot on USA Network. Colony premieres on January 14, 2016 at 10/9pm central. Following are videos with the cast and crew, as well as highlights from the interviews, and of course photographs. Information about the series can be found at the end. 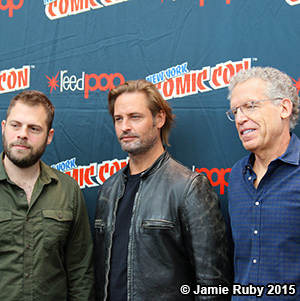 *  On the plot of the series

*  On the series being
cinematic; partnering with
Legendary

*  On themes of the series, how
it relates to the real world,
and uniqueness

*  Holloway on the physicality of
the role

*  Cuse on working with Guillermo del Toro for The Strain

[quote width="auto" align="none" border="#666" color="#666" title=" -- Josh Holloway"]He's on a journey, but it's not a super hero show. It's not physical in that way, but it gets physical. He's in desperate situations, and he's an ex-military FBI agent, but he was more of a man hunter - more mental. He can do the physical, but it's more about putting puzzles together. That's his super power, if you will.[/quote]

Set in the very near future, COLONY centers on one family’s struggle to survive and bring liberty back to the people of an occupied Los Angeles. SAG winner Josh Holloway (“Lost”) stars as former FBI agent Will Bowman and Satellite Award winner Sarah Wayne Callies (“The Walking Dead”) stars as his wife, Katie, in the series that takes place in a dangerous world of divided ideologies. From Legendary Television and Universal Cable Productions, COLONY permieres on January 14, 2016.