**Note that I will update this page if I add any more (& the date will reflect that). I will also be adding official photos, videos, and highlights from the networks, once I get my own up, as well as such from panels/press rooms that I did not attend.**

I arrrived Thursday afternoon, much later than planned, and it was really only the start to discovering the headache that is travel in New York, but I digress.

As most of the Syfy press rooms were already filled when I applied, my first of the day was the press room for Hunters, an upcoming series based on the best-selling novel, Alien Hunter, written by Whitley Strieber. Attending the press room was Strieber, Executive producers Gale Anne Hurd and Natalie Chaidez, star Britne Oldford (Regan), and prosthetics supervisor Justin Dix. 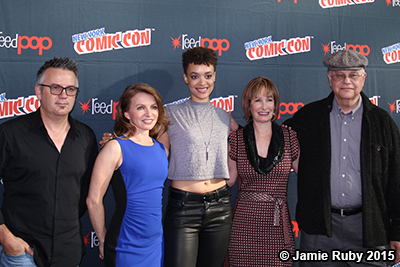 This is where it became quite apparent that NYCC was not like Fan Expo had been at the press rooms. I was at the photo line and realized that they did not wait until everyone went through to start roundtable interviews, and as such I accidentally missed the beginning of the first interview at our table, which was with Strieber. I jumped back as soon as I realized my mistake. I just have to say, I really don't understand why people who do roundtables seem uninterested in photos for the articles. At the next event, I plan to try to get press line instead of roundtable access, not just for the photos, but also to interview the talent individually, which I feel suits SciFi Vision better.

Hightlights, video interviews, and photos from the Hunters press room 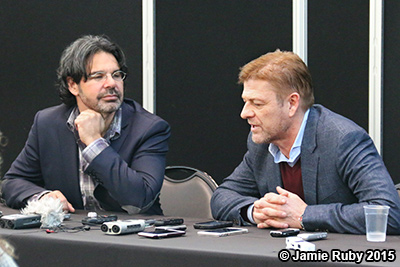 I also last minute was granted access to the Legends press room with star Sean Bean (Martin Odum) and executive producer Ken Biller. The room was set up conference style, and there were no seats left. I don't think any of my audio came out, but I was able to get some photos. I'm going to try in the future to at least piece together some of the highlights from the room.

Photos from the Legends press room

I spent the majority of the rest of the evening getting my bearings and checking out the rest of the convention, including the show floor and Artist Alley. I of course also checked out a lot of the cosplayers, for which I would be interviewing a handful for Marriott Rewards before the end of the weekend.

Be sure to also check out my photos from Thursday of the floor and other things I fancied.
Twitter
BotonSocial por: SocialEmpresa
Category: Special Events