It was a bright and sunny weekend in late June when the horror started. The quiet Lakeside Chalet sat pristinely against a bright blue, cloud streaked sky, quiet and still. Little did anyone know that in the bowels of that building an abnormal world was churning.

Once inside the chalet a quick stop at the hotel desk led me down a long white hallway that ended at a cross hall. This little area, taken over by the registration table and small souvenir stand didn't seem like much. There were a few volunteers checking people in, giving them their wristbands that allowed admittance to the convention. It wasn't until I saw a zombie walk past me and post a sign on one of the closed doors proclaiming a zombie hunt would take place inside that I started to feel like there was something more going on. 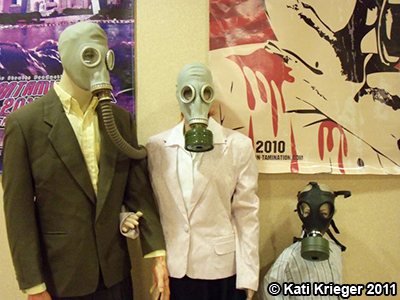 This first floor area had a few rooms set aside for ongoing panels, movie viewings, and for meeting a few actors. The ever-entertaining Sean Patrick Flanery and David della Rocco were situated in a room on this level. Unfortunately, their Boondock Saints co-star, Norman Reedus, was unable to attend the convention due to scheduling conflicts. It was much the same for headliner Eric Roberts as well.

However, the biggest attraction upstairs seemed to be the Vincent Price film marathon (only on Saturday). Being St. Louis born and raised myself, I was proud to see us honoring what would have been the 100th birthday of my city's most ghoulish native son. Overall though, the upstairs was rather quiet, a few people bustling about buying schedules and t-shirts.

Fortuitously, about that time is when I noticed the steps leading down. The first thing that greeted me at the bottom of the stairs was a small family of mannequins, each member wearing a gas mask, including the little boy. And just to let all you Doctor Who fans know not only was my first thought "Have you seen my mummy?," not long after I passed by someone put a sign up over the youngest mannequin that read just that. 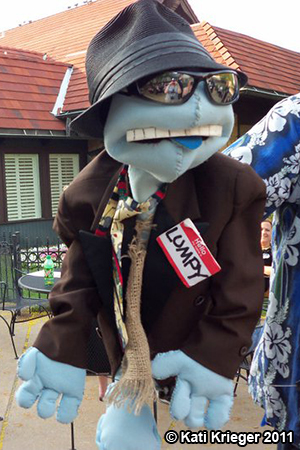 Turning through the archway, I was met with astonishingly equal amounts of books and bloody body parts. To my left down this short entryway were several tables offering independently published books of the sci-fi/horror variety. The one table that stands out the most in my memory had the author telling people his novel could be defined as "ghost erotica."

On my right there were vendors discussing the best way to make gory prosthetics, which types of fake blood looked more realistic, and man, what time was lunch? A few movies were being promoted including Robert Noel Giffords' Fragments of Shadows about a warrior angel sent to earth, starring guest celebrity Max Wasa, and his other film No Strings. But to be honest, I was more distracted by the severed limbs.

The room widened after the initial delve into the macabre. A tarot reader under a little tent stood in the middle surrounded by more independent film promoters, a skateboard artist, comic book vendors, and the Zombie Kissing Booth/Puppet Show. I couldn't help but donate a dollar to get a kiss from one sweet felt zombie.

Off to the right, there was showcased the VIP dinner's cake; equal parts repulsive and attractive in its detailing.

One could imagine my surprise that after already seeing so much, there was still more. The noise of the crowd led me through a set of double doors where the real main stage awaited. The chalet's ballroom was full of row upon row of vendors and actors. T-shirts by the score, comic books galore, movies full of gore, and all that just down one aisle. There were Halloween masks, figurings, and posters and prints of all shapes and sizes. Slackers had a booth right next to the original cover artist for Alice Cooper. Artists were working on new prints as they sold their already made ones. I was especially surprised to see a t-shirt for the movie Night Breed, a horror movie so obscure that I thought I had been the only one to watch.

As far as celebrities go, Dr. Cryptosis was cool in a campy sort of way. At times his accent got a bit overdramatic (read more Count Chocula than Count Dracula) but it was all in good fun. The cast of the original Fantastic Four movie was there and they were an excellent bunch. Jay Underwood, who played Johnny Storm for the movie, was aglow with enthusiasm as he chatted with attendees about all his films. Joseph Culp, Alex Hyde-White, Michael Bailey Smith, and Rebecca Staab (with her cute little dog under the table) seemed all too excited about the prospect of their movie being brought to Netflix. My favorite of the bunch though was probably Carl Ciarfalio. Not only was he kind enough to take a picture of our group under the Fantastic Four sign, but he also expressed genuine concern for departing attendees when he heard there was flash flooding in the area. 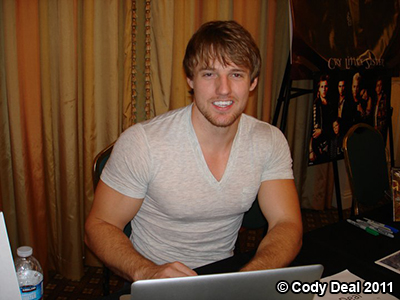 Friendly actor Dan Shor was situated against the back wall right next to sweetheart Cody Deal. Both men were incredibly fun and very apt to give out hugs to attendees.

I got a special treat to speak with most of the horror movie actors including Brad Loree (Michael Myers), Kane Hodder (Jason Voorhies), Tony Todd (Candyman), and Bill Johnson (Leatherface), because my boyfriend Tim, who is an imposing 6-foot-9 330lbs gentleman, actually impressed them enough to call us over for a chat. In fact, after hours, part of my group had the pleasure of chatting Loree and, in contrast with his best-known character, is as nice and charming as can be. And I was over the moon when I found out that the actor who played one of my favorite featured zombies in the original Day of the Dead (Mark Tierno) was there! His co-stars, Gary Klar and Terry Alexander, were there as well. The camaraderie between them, and in fact all the celebrity guests, was astounding to see and feel. 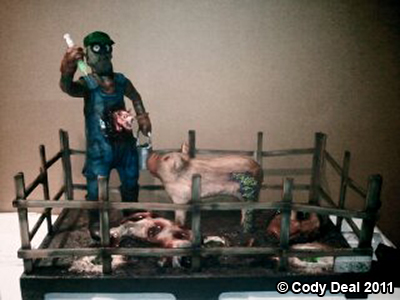 To make a long story short, St. Louis's Contamination the Sequel exceeded my wildest dreams. Sure, compared to some conventions it was small, but that meant more face time with the actors people came to see. It also helped that the area it took place in, Westport Plaza, has tons of restaurants and bars which lend to a chance meeting outside the convention area. I hope next year it can be bigger - a few more stars, a few more vendors, a few more attendees dressed in an array of costumes - but still maintain that intimate quality. I know I had tons of fun, and I'm pretty sure everyone else did too. And if I may be cliché, I'd give it two decomposing thumbs way up.
Twitter
BotonSocial por: SocialEmpresa
Category: Reviews