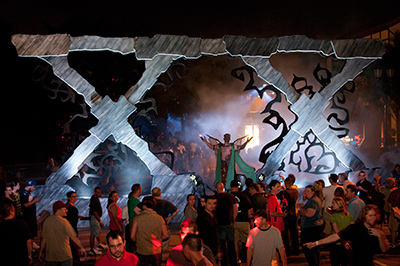 The first of the eight houses is Horror Nights: The Hallow'd Past, which is where you can travel the realm of past Horror Nights and see props and sets from previous years. The Orfanage: Ashes to Ashes is where you learn about Cindy, who up until now has not gotten her time to shine, but now her soul will take revenge. There is Hades: The Gates of Ruin, where you make your way into the Underworld and are faced with terrifying creatures of legend. Another is Psychoscarepy: Echoes of Shadybrook, which is filled with criminally insanse souls. An elite corp of soliders were developed ten years ago and the test subjects are ready in Havoc: Dogs of War. Souls of the victims of a plague in 1534, along with the doctors who were betrayed and sealed in with them, have finally escaped to seek vengeance in Catacombs: Black Death Rising. Another to visit is Zombiegeddon, where the government is now capturing the "un-live." The last is Legendary Truth: The Wyandot Estate, a haunted house where the Spirit Seekers have a machine that gathers spirits towards it, and have decided to do a live broadcast from the house. 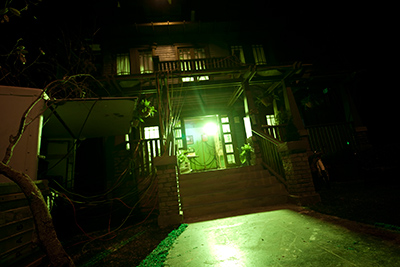 There are also six scarezones at the park. A scarezone is basically an open area, decorated to evoke fear, where costumed "scaracters" scare you, sometimes by actions such as running at you with a chainsaw, or creepily following you around. The scare zone HHN: 20 Years of Fear is where you will encounter scaracters from Halloween Horror Nights past. Fear Revealed is about the souls of Chaos, Death, Sacrifice, Mythos and Vengeance, who Fear created. Fear has waited for the 20th cycle, which is finally here. Zombie Gras, is a Mardi Gras parade that has gone awry, as the undead walk among us. Experience a glowing skeletal nightmare in Esqueleto Muerte. In Saw 'n Steam, the earth's crust has openend and exposed New Yorkshire's inhabitants to heat and left them with diminishing oceans. They will go to evil lengths for the water in your body that they covet. The last scarezone is The Coven, where Sirens from the Cult of the Raven, which has unsettled spririts, may conjure spells and condemn you to death. 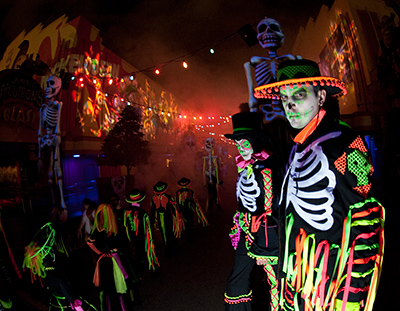 The park also has two live shows, including Bill & Ted's Excellent Halloween Adventure, where the two "most excellent dudes" enlist help from the biggest names in recent pop culture to help keep their show. Parodies include references such as Harry Potter, Twilight, The Jersey Shore, Iron Man, and more. I really enjoyed this show and thought it was quite entertaining.

The second show is Brian Brushwood: Menace and Malice, featuring an outrageous illusionist who will show you two realms of bizarre magic.

As part of the digital press tour, Sci Fi Vision was invited to take part in the terrifying night. It started with a water taxi ride, overrun with some scaracters. We were also joined on the ride by Neil Grayston from Eureka. Upon reaching Universal Studios park, we were invited to take a seat and learn about the history of Halloween Horror Nights and watch a promotional video. We then split up into groups and were given tour guides to take us through the park.

Having a private tour through the houses and scare zones added to the experience, because we were given backstories on each of the haunted houses before entering. The park was crowded and having no lines of course helped the experience. We were told other park attendees often waited in line for an hour or more, and it seemed unlikely that on your own you could make it through the full experience in one night. 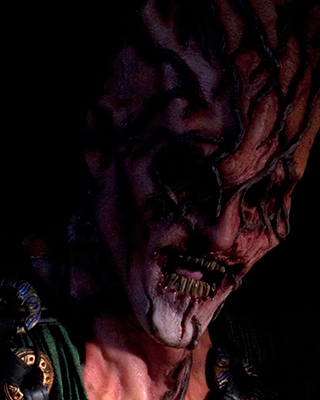 The night was a lot of fun. The houses, however, seemed more about shocks of people jumping out at you as opposed to being scared of what you saw. All in all though, the sets were very detail oriented as you would expect from a movie studio, which I believe made the experience more enjoyable. Seeing things in the houses in my opinion is more fun than the normal almost pitch dark haunted houses I am used to. It really helped with the atmosphere. Though, I admit, even I did jump a few times!

The scare zones were equally fun, though actually I found them to be more intimidating. Having people chase you with chainsaws is a new experience. You also could get a better look at what went on in the scare zones because you weren't being shuffled in a single file line and the scaracters came at you from all sides. Of course by being out in the open you also were able to get a good look at all the detailed costumes and makeup, which were really well done. Esqueleto Muerte, the Day of the Dead scare zone, is also really cool to look at in the light. There are a lot of vividly colored cool props that go along with it. There are a few other things to see as well, such as one area filled with lighted jack o'lanterns.