Bottrell notes, “We’re very excited for Sci Fest L.A. 2015. The festival was so successful last year with sold out houses and sci fi stars from Lost, X-Files, Star Trek, Supernatural and more that we’re building on that this year. The roots of science fiction run pretty deep in L.A., which transformed the genre into a worldwide industry and a global product. Sci fi is part of L.A.’s cultural heritage.” 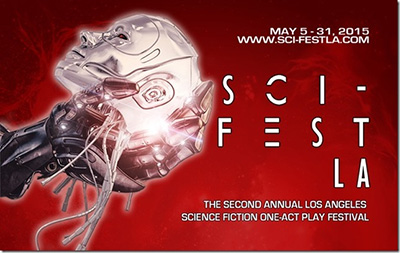 ACCESS by Spencer Green
Breaking up is hard to do. Especially in multiple dimensions.
Directed by Steve Kaplan

A BILLION TUESDAY MORNINGS by Nathan Wellman
A lonely autistic man is unable to convince his doubting daughter that his new invention will change everything…until it does.
Directed by Jeff Liu

THE CASE OF FOUR AND TWENTY BLACKBIRDS by Neil Gaiman
Adapted by Michael Bernard; Directed by Annie McVey
Film Noir meets Mother Goose as P.I. “L. Jack Horner” investigates the suspicious death of one “H. Dumpty” in this insane mash-up by the iconic author of “American Gods” and “Coraline.”

THE DEPARTED by Clive Barker; Adapted by Christian Francis
A ghostly tale of love and obsession. Based on the acclaimed short story by one of the most influential contemporary creators of fantasy and horror. Directed by Rob Hollocks

EFFICIENCY by Perley Poore Sheehan & Robert H. Davis
A ruthless dictator demands a meeting with a horrifically wounded soldier who has been transformed into an unstoppable killing machine. Directed by Jaime Robledo

HUMAN HISTORY by Joel Silberman
Far in the future, in a classroom on a distant planet, racial tensions run high as Earth’s history is debated, forgotten and relearned.

THE LUNCHTIME SHOW by G. Clarence Davidson
In deserted border town, visitors to a ramshackle “roadside attraction” get a little more than they bargained for.Directed by Drew Barr

MOBY ALPHA
Written & performed by Chuck Armstrong & Charlie Stockman Direct from its smash run at the Hollywood Fringe Festival, a mad captain’s quest for revenge leads his crew to the brink of destruction in this hilarious two-man retelling of Moby Dick (in space).

TURNOVER by Chris Graybill
Within the walls of a futuristic penal facility, a “job interview” turns into a sinister game of cat-and-mouse between a dangerous inmate and her interrogator.Directed by Jeffrey Marcus