Early in November, SciFi Vision was lucky enough to get a visit to the Syfy set of the upcoming series Killjoys.

Before touring the set, myself and another member of the staff, along with two other journalists, sat in a production office and had roundtable interviews with the series three stars: Aaron Ashmore, Hannah John-Kamen, and Luke Macfarlane (coming soon), and learned a bit more about the show.

In the future, in a galaxy on the verge of interplanetary war, bounty hunters called Killjoys are hired by the Company as independent and non-bias mercenaries to pursue warrants across the Quad, which consists of the planet Qresh and its colonized moons: Westerley, Leith, and Arkyn. Killjoys hold no allegiance and follow only one code, "The Warrant is All."

Westerley, which is where the main characters, a trio of Killjoys, dock their ship, Lucy (voiced by Tamsen McDonough), is more industrial and lower class, whereas Leith is more developed and more of a middle class society. 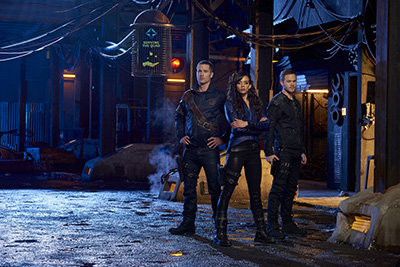 Aaron Ashmore plays John Jaqobis, the tech guy on Lucy. Out of the three, he is more of a pacifist, according to the actor.

Luke Macfarlane plays Johnny's estranged brother, D'Avin. Having a military background makes him an asset to the team.

Hannah John-Kamen, as the mysterious Dutch, rounds out the trio. Don't let her pretty face fool you, she's the most experienced of the team and can kick ass and take names.

After the roundtable interviews, we moved on to the set tour.

Inside the studio, we first we saw parts of Lucy, including the cargo hold (which Macfarlane likes to referr to as "the garage") which had cargo crates and also a vehicle. There were two ladders that went up to another location on the ship (but in reality went nowhere) and a cargo bay door that we were told really opens for them to shoot out of.

We also saw on the ship a lounge area that had a table and kitchenette, a tiny bedroom that is used for the sleeping quarters of multiple characters and simply dressed different, and what may have been a decontamination area.

We also walked through hallways that would be between the rooms connecting them, the walls made of a shiny blue hexagonal pattern. 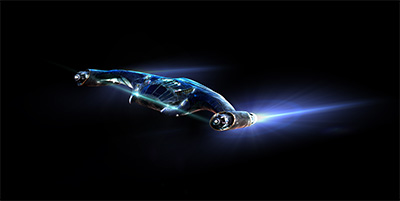 Also of note, the ship was very new looking, clean, and sleek; not run down like in a lot of series. We were told by Allison, who took us on the tour, that John takes care of his ship; there's a lot of love there.

The areas of the ship itself were actually in pieces rather than one continuous set piece for ease of filming. They definitely looked quite different from the outside, most covered with plain wood on the back.

Outside the ship we saw a transport vehicle as well as some props of dead bodies that looked like they had been burned.

Surrounding the area and different ship pieces was a track that can hold either a green screen or a star field screen used while filming, that can completely surround the set like a curtain. There was also a blue sky set up that they use to film in the same way. 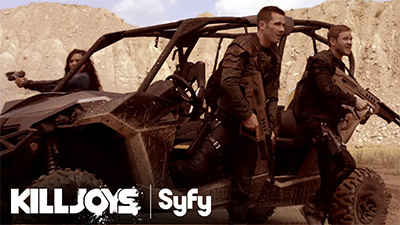 We toured not only Lucy, but also outside the bar the Royale in Westerley, which is a common location for the characters to visit. Some of the actors filmed some pickups at the bar while we watched the monitors and briefly talked to the director.

We also got to peek into the bar in between takes. The establishment was more of a rustic industrial type then futuristic, but there were electronic signs outside that said "Like No Other."

It is interesting to get to walk from inside to outside the bar, while still being indoors.

Outside the Royale, on the moon of Westerley, everything has more of a gritty feel. It's easy to imagine characters walking about the place.

We then moved onto the bazaar happening on the moon Leith, which was a beautiful market. There were tons of shops. Many of the beginning shops had sort of an Asian flair with lanterns and such. There was some kind of tea stand, places that sold jewelry and scarves, a bakery, and some places with odd plants most likely native to the moon, among others.

We also walked pass the warrant broker's office, which had a rich wood motif, as well as the florist, and a wine shop. 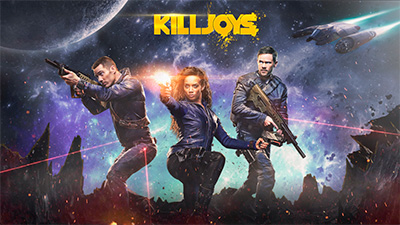 While we did see two of the three moons, we were told that the planet Qresh is filmed on location. We did not at the time learn anything about the third moon.

All in all, Killjoys has a beautiful and unique set that I believe will serve the series well.


Although unfortunately there were no photos taken to post, there will be interviews with the three main cast members posted within the next few days, so stay tuned.
Twitter
BotonSocial por: SocialEmpresa
Category: Special Events