This year the Syfy Digital Press Tour was held in Toronto, Canada. On the second day, after meeting in the lobby the group of us were picked up by the bus to head to the Defiance set. When we got there we stopped in the lunchroom to grab some breakfast before the tour. Even this room had something to offer as there was concept art on the walls. 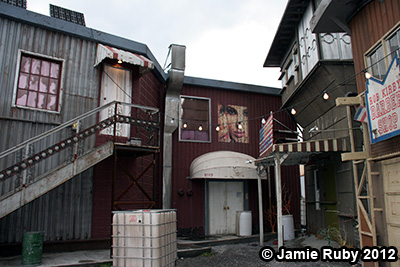 Next we were broken off into groups and started the set tour. We passed by some costume pieces as we left the building.

Having seen a few sets before, I went in with certain expectations without even realizing it. Most times a set looks like, well, a set. Sometimes there are movable walls, sometimes not, but usually, except for the room you are in, the rest is “behind the scenes” as it were; you can tell it’s simply a set, which don’t get me wrong, is still very cool and it lets you see how things look so much different on television. This, however, was not so with the Defiance set. 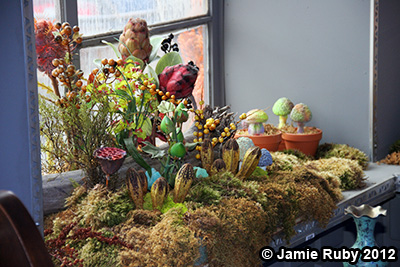 Rather than a set, I would describe as simply a town. Syfy has actually created a believable small town on the lot. You can walk from building to building, and many of the interiors were even 360 sets, meaning they could film from all angles, so they were actual real buildings, not just facades. This made me really feel like I had walked into Defiance.

I remember being in awe and just taking it all in, stopping to take photos of pretty much everything. 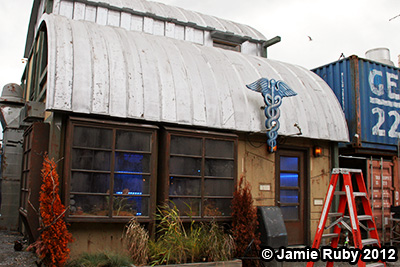 One of the first buildings we saw the inside of was the Indogene doctor (Doc Yewll)’s medical lab. Besides having a bed to treat patients, the room was covered with alien plants and specimens in jars. It was cool to see this stuff up close as you could tell things such as the plants were just plastic props, yet would look realistic on screen (and in my opinion photograph really well). 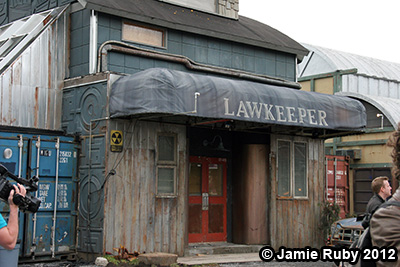 Another building we went into was the Lawkeeper’s office, which had a jail cell inside.

We also got to take a look around the mayor’s office, which had almost like a mini museum in it, showcasing some things left over from the old Earth. 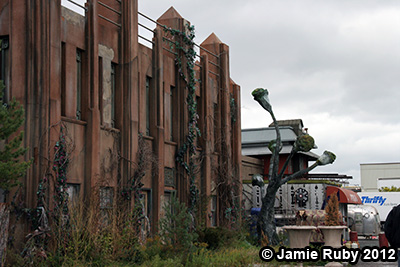 We also went into what I believe was the McCawley house. We saw various rooms, such as a living room and kitchen. Again, even though it was a set, it felt real. It was 360 because they could take out some of the walls if needed. 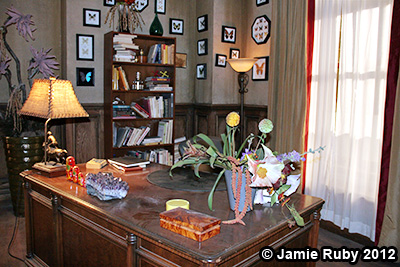 Another interesting place we went was inside of, was what was supposed to be a piece of the St. Louis arch on the series. It housed a radio station. 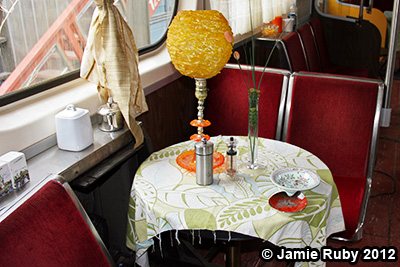 Another “inside” set was an actual rail car that the people of Defiance had turned into a café. It was decorated nicely inside. It’s too bad they didn’t actually serve lunch there! 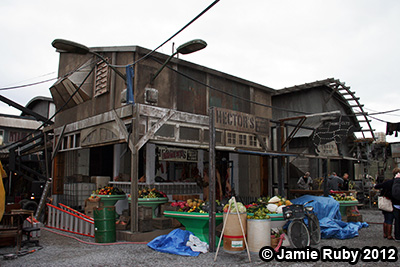 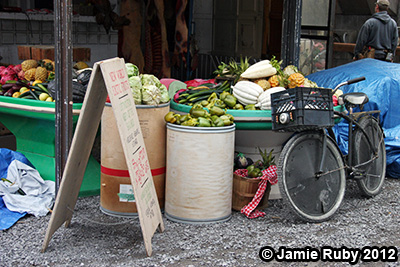 There was also a market. Much of the food such as the food at the stands – new world exotic fruit – was really realistic, even up close. Besides the food there, there was also a butcher who sold what was called pow meat. 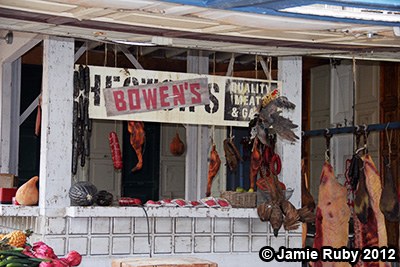 Other places to visit in town included a pawnshop, a furniture store, a bakery, a gas station, a key maker, a pharmacy, and more. I didn’t go into any of these buildings, however, so I’m not sure if there were actual full insides to them.

I found out later there was also a Castithan building, but I did not get to see the inside of that. 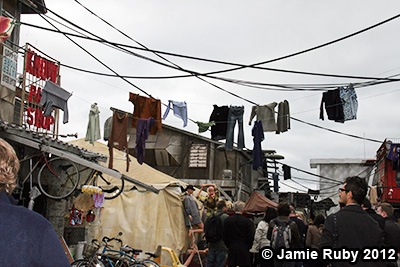 There was also a more run down side to the town filled with tents and things. Everything really looked “lived in.” There were even clothes hanging from wires strung around part of the town. 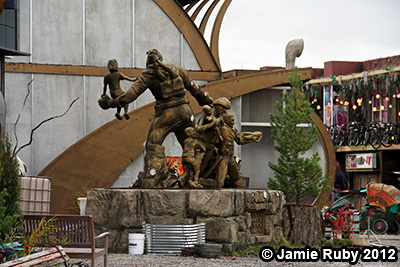 Another thing you will recognize from the series is the statue in the middle of the town, as well as the Dodge Charger that the lawkeeper uses. Also to note, in various places in the town there was writing on signs and things from the different alien races, though obviously I had no idea what any of it was supposed to say. Perhaps eventually someone will give some translations. 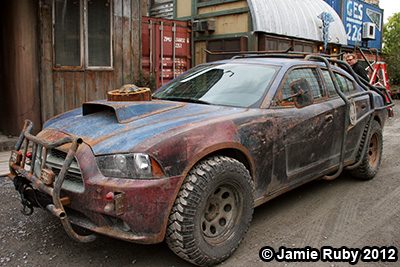 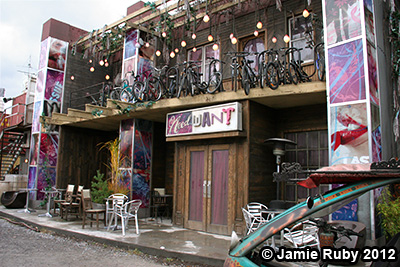 Another one of the main sets with interior, and my absolute favorite, was the Need/Want bar/brothel. The inside is gorgeous, especially with the way it is lit with purplish lighting. There were rooms for patrons and also an upstairs (well at least a balcony) that would have more rooms, as well as comfy couches around for people’s needs, but the feature that stood out of course was the bar, or rather what the bar surrounds. Inside the middle of the building is a huge tree that the bar and stools wrap around. There was some kind of plant life hanging from the branches, but more interesting than that were the bulb lights. Tons of these alien looking lit bulbs hung from the tree above everything. It really helped to create the atmosphere. 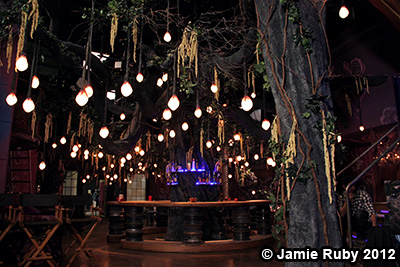 It was really my favorite part of the room, if not of the whole lot. It was really easy to imagine this place as a real club. There were even food and drink menus.

After exploring, this was the last stop as the Q&A for Defiance was held later in this building.

For more photos from the set, please be sure to visit the gallery and stay tuned to SciFi Vision for more coverage.
Twitter
BotonSocial por: SocialEmpresa
Category: Special Events