Today SciFi Vision was given the unique opportunity to visit the set of Syfy's hit series Warehouse 13. We were told that we, along with another reporter (Troy Foreman) would be the last to visit the set for interviews as they were wrapping up filming.

During the day we watched and/or listened to a few different scenes being filmed, including one with Pete and Myka, one with Claudia and Artie, and one with the full cast. We were told the cast scene was the last to be filmed in Artie's office. 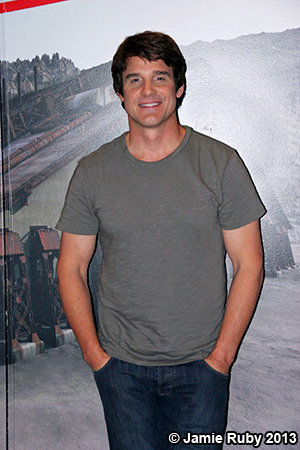 In between takes we were able to get exclusive interviews and photos with most of the cast, including Eddie McClintock, Joanne Kelly, Allison Scagliotti, Aaron Ashmore, and executive producer Jack Kenny. Those interviews will be available soon (part of them, however, we won't be able to show until after certain episodes air). We also of course have some photos of the set coming as well.

Stay tuned for more coverage (including many more details of our visit), and don't forget to come back in the next bit to check out our coverage of Fan Expo Canada and interviews from the press rooms.

For now you can check out a few photos from our Warehouse 13 set visit in the gallery.
Twitter
BotonSocial por: SocialEmpresa
Category: Special Events