This year the Syfy Digital Press Tour was held in Toronto, Ontario, Canada. The night started with dinner in C5 Restaurant, inside the Royal Ontario Museum, where the press got some time to hang out with some of the Syfy stars. In attendance were Sam Witwer, Sam Huntington, Meaghan Rath, and Kristen Hager from Being Human, Lucas Bryant, Eric Balfour, and Adam "Edge" Copeland from Haven, and Jesse Rath (Meaghan's brother) from Defiance. 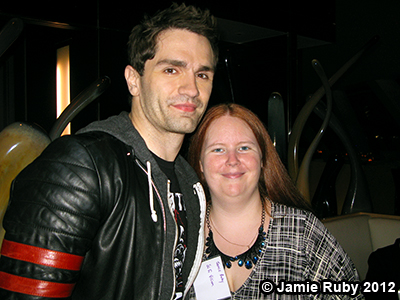 The night was relaxed with drinks and hors d'oeuvres and before dinner I first talked to the Being Human cast. I've met Witwer quite a few times now between conventions and the press tours, and he's always great to talk to. I also talked with Huntington and Rath who were at the tour last year as well, both about travels, and about why they were leaving early - they are currently still filming, and had to be on set at 5 a.m. to be out of the strip club they would be filming at, before 9 a.m. I'm not sure what happens in the episode, but it's definitely a different venue for their set! I didn't get a chance to talk to Hager at the time, but I did meet with her later in the night. 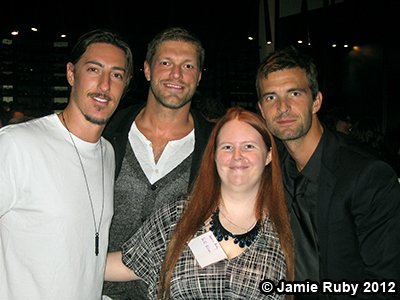 I also spent time getting to know some fellow journalists, including Erin Willard of SciFi Mafia, who had some great questions for the actors. We went to meet the men of Haven, which is our favorite Syfy show, who invited us to sit with them, and we had a blast. I had never met Bryant, Balfour, or Copeland in person, but all three were very charming and a lot of fun. We did hear a bit about the show from them - Balfour talked about the CGI used for his silver eyes, rather than contacts, and I joked with Bryant about his character kissing a woman other than Audrey (Emily Rose) in a preview for an upcoming episode of Haven (I'm a Naudrey shipper). Copeland seemed happy to be part of the Haven family. 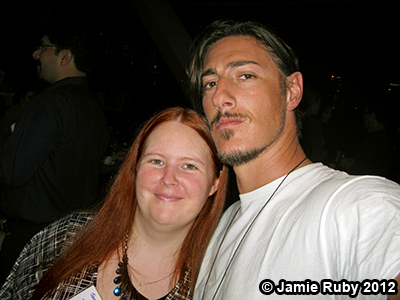 When it was time for dinner everyone moved into the dining room. In awhile we were visited by Sam Witwer, who talked a lot more about the upcoming season of Being Human. A couple tidbits - Aidan will be around humans more this season (which he really likes) and another change, he'll be sleeping in the basement, as the upstairs holds bad memories as he previously killed two women there. Although he revealed that we won't see a lot of Aidan in the first few episodes, it sounds like the trio will be in more scenes together this season, which is great news for everyone. Witwer feels this is the best season yet. 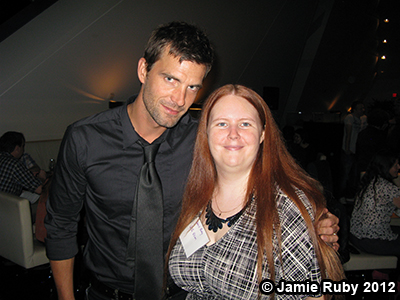 Witwer also mentioned about other characters to look out for as the season progresses, including the father of the werewolf siblings from last season.

Fans will also get more backstory on Aidan - including flashbacks of course with Mark Pellegrino.

He also touched a bit on Nora. Now that Kristen Hager is a series regular, we'll be learning more about her backstory. 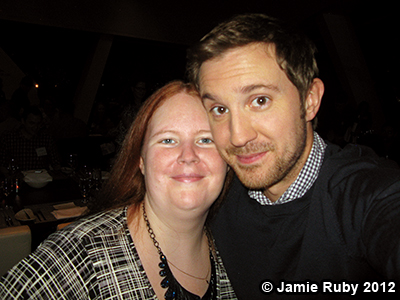 This year Anna Fricke will be executive producing the series without her husband, who is currently working on the CW's Supernatural. Witwer had many complements to give, saying that the work is very collaborative and the cast will sometimes change lines to better fit their characters, and are often asked for input in the script.

We were also joined by Copeland who talked about being a series regular on Haven now and buying a home in Nova Scotia. 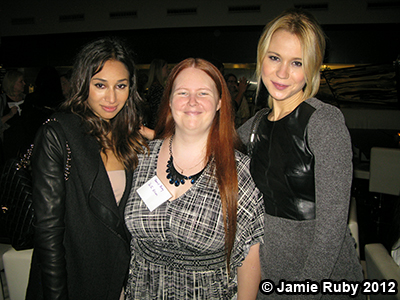 After dinner I got a chance to meet with Meaghan Rath again, and also met and talked to Kristen Hager.

During the night I met some new reporters and visited with some old friends. I think everyone had quite an enjoyable time for the first night of the event; I know that I did.

Stay tuned to scifivision.com for more coverage and photos of the Syfy Digital Press Tour.