EVERY TOWN HAS A LITTLE DARKNESS IN IT...IN HAVEN, IT JUST BECAME PITCH BLACK.

THIS SEPTEMBER, THE TROUBLES ARE MULTIPLYING IN THE LATEST HOME ENTERTAINMENT INSTALLMENT FROM SYFY'S FAN-FAVORITE FRANCHISE

The Troubles are returning to Haven like never before in HAVEN: SEASON FIVE, VOLUME ONE, arriving on extras-loaded blu-ray and DVD on September 8 from Entertainment One. Read the full press release.

In preparation for the the release, SciFi Vision is giving away 3 copies of HAVEN: SEASON 5, VOLUME 1 on blu-ray! 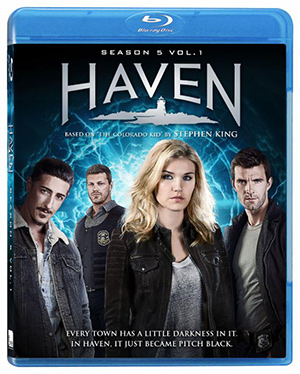