The Vampire Diaries 3.20 Review: "Do Not Go Gentle"

Rumors of Alaric’s impending demise, based on the actor’s upcoming schedule, have been running rampant for quite some time. So it’s only natural that his character arc this season should lead to a death scene. It provides the season with one of its more poignant farewells in quite some time, and sets the stage for an emotionally draining season finale.
Alaric’s insanity is revealed to be the product of meddling by Esther, who was using her unique gifts to brainwash him each and every time that he was killed, before the ring would bring him back. So every time he died, he was one step closer to becoming Esther’s anti-vampire sleeper agent, a status that he now retains, despite his own conversion.

It goes a bit deeper than that, of course. Esther needs a warrior equal to her wayward children with a weapon strong enough to withstand resistance. So the ritual in this episode rather neatly sets up Alaric to be an Original (or on par thereof), and renders the final white ash stake all but indestructible. Despite his attempt to let himself die in defiance of Esther’s plan, Alaric joins the undead with stake in hand, ready to wipe out his “brothers”, their “progeny”, and then himself. 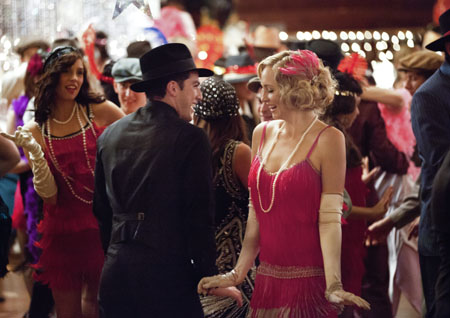 It all promises to take what might have been a simple, heroic departure and render it a chaotic nightmare for Elena and her friends. Elena is already reeling from the latest loss in her life, the last bastion of an older guardian that she could turn to for support, and she still has to work through her endlessly-conflicted feelings for Stefan and Damon. Speaking of Stefan, all those things he did earlier in the season just seem to be glossed over at this point, despite the occasional reference.

It all requires Esther to have enough time to perform her spell on Alaric, which means trapping the vampires in the school during the latest dance. I’m hoping I missed something in the actual episode, because I couldn’t figure out why one of the humans couldn’t just break the circle of salt and render the barrier useless. Maybe it’s from watching too much “Supernatural”! Regardless, it did give all of the characters that have been at each other’s throats all season a chance to see that they have a common enemy. (Even if Klaus still has some serious self-confidence and paranoia issues.)

If only because it did a better job of explaining what happened with Alaric and clarified that Esther was the season’s real threat, this episode managed to bring the season back up from the stumble of the previous installment. Delivering that powerful farewell scene is just icing on the cake.