The war rages on, as we so clearly see in the opening scene of the episode. It's understandable that "Game of Thrones" tends to cut away during the actual battles, given the budgetary constraints of the medium. "Thrones" has typically done a pretty satisfactory job of working around these constraints, to the point that I don't even feel bothered when I don't get a full-blown battle sequence. The battles aren't really where the most important story developments occur, anyway (though I'll admit that I wouldn't mind seeing at least one actual on-screen battle at some point during the season). More important than the battle is the chance meeting between Robb Stark and a rather attractive battlefield nurse the next morning.
This nurse (Talisa) seems to have no fear of speaking her mind to Robb, which seems to spark Robb's interest in her. Talisa has "love interest" written all over her. But strangely, from what I've read, it seems as though she may be entirely unique to the show (and I'm getting conflicting reports about this). By most accounts, "Game of Thrones" has remained relatively faithful to its source material up to the present. Could this end up being one of the more dramatic deviations? A new character isn't necessarily a bad idea (and it's been done already, in the form of Ros), but introducing a love interest is a pretty big deal, especially when Robb is already betrothed to another woman that we (and Robb) haven't even seen yet. My guess is that Talisa will die a very tragic death at some point. Although, given that this is "Game of Thrones", that may not be a particularly impressive prediction.

Progress on the Dothraki storyline during this season has been relatively slow, thus far, but it seems as though that may be starting to change. I hate to say it, but I'm finding it increasingly difficult to like or sympathize with Daenerys. I found it amusing that her arrogant boasting proved to be so useless when dealing with the leaders of Qarth. Yes, her dragons will one day be large and powerful, but it's staggeringly foolish to use threats rather than diplomacy when dealing with a superior force that might just kill all of you and take your dragons from you. Dany is lucky that Xaro was there. He looks to be a fascinating new character, and one who probably knows more than he lets on. Might he have some connection to Lord Varys?

One wonders how much more poor Arya can take of this hell of an existence that she's found herself in. Assuming that she doesn't just go insane, one might suspect that this will all serve to make her stronger. The latter seems to be the case so far. Having Arya constantly repeating the names of the people she (seemingly) intends to kill was a great touch. Harrenhal is about as horrific a location as anything I've ever seen on "Game of Thrones". There's a nightmarish quality to the whole sequence, and a very real fear of imminent death by slow torture. One viewer humorously noted that you know things are bad when the arrival of Tywin Lannister makes you sigh with relief. I was also amused by how easily Tywin detected that Arya was a girl. It feels more realistic that Arya's deception only works on stupid people. 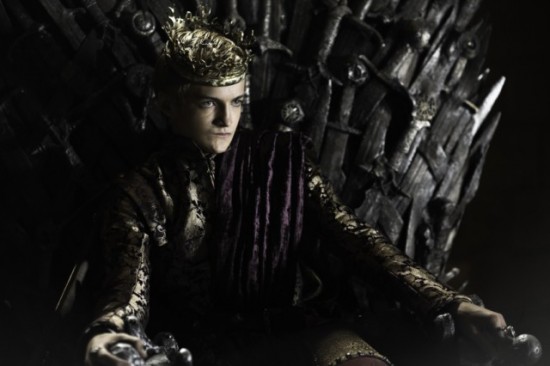 I was wondering when Tyrion would finally meet up with King Joffrey himself again and chastise him. The job of Hand of the King doesn't seem to entail a lot of actual interaction with said King. As expected, Tyrion's scheming at King's Landing results in most of the episode's funnier moments. I loved that Tyrion and Bronn's plan to soften Joffrey's sadistic behavior amounted to little more than just "getting him laid". It's not a bad plan, really. It's too bad it doesn't go as planned. Tyrion seems to have made his first miscalculation. Joffrey is smart enough to see what's going on, and uses the situation to send Tyrion a message. Tyrion loves his whores, so I suspect that he won't be at all happy about this.

Catelyn is still stuck at Renly's camp, trying to broker peace between Stannis and Renly and dealing with the advances of the newly arrived Petyr Baelish. Not surprisingly, she is not at all happy to see her old friend. I find it interesting that Petyr's personality seems to shift so dramatically when he talks to his "Cat", as opposed to just about anyone else. Normally, Petyr is very controlled and confident; very self-assured of his ability to manipulate and push people's buttons. But when he's around Catelyn, he seems to lose his mojo. It's like she's his Kryptonite. Of course, he still lies to her face, but his lies are somewhat awkward and unconvincing, and he seems to mix these lies with more truth than he normally would. One can't help but get the impression that he has genuine feelings for Catelyn.

I'm fairly convinced now that Petyr really did intend to help Ned, and only made the decision to betray him when Ned refused to follow his advice. There's still a lot of room for ambiguity here, as one could also theorize that Petyr had planned all along to get rid of Ned so he'd have access to Catelyn, but I think that my theory fits better. I believe Petyr when he says to Catelyn that he wanted Ned to serve as protector of the realm, and begged him to seize the moment. These words fall on deaf ears, though, so Petyr switches to other, more effective tactics. It seems that Catelyn may have no choice but to form a relationship with the man she sees as responsible (at least partially) for the death of her husband. That's drama for ya'.

Renly and Stannis might make powerful allies, but neither seems likely to budge. Between the two men, my bet is on Stannis. Renly has the numbers and the popularity, but Stannis has age and experience, and may well have an actual god on his side. No discussion of this episode would be complete without a mention of that final scene. It begins with an interesting conversation between Stannis and his faithful knight, Davos, on the deck of a ship at night. Here, we get even more information about the history between the two men. I'm glad to see this information included for fans who haven't read the books. And I'm glad to see it integrated in such a way that it doesn't feel too much like exposition.

This conversation leads to Stannis asking a favor of Davos: sneak the "red woman" ashore, for some unknown purpose. Of course, this is all wonderfully interesting because Davos is still just as suspicious of Melisandre as ever, and some conversation between the two is unavoidable. Davos isn't just skeptical of Melisandre. He's skeptical of any gods or magic. So once he's ashore, he's in for the shock of his life. In what might be the most blatantly supernatural moment of the show, Melisandre strips naked and gives birth to some sort of shadowy, demonic-looking being that, once born, seems to start taking the form of a man. I love this scene, not just because dark, scary magic is cool, but because Davos is suddenly neck-deep in something that, not a minute before, he didn't even believe in. I'm really looking forward to seeing how this changes Davos in future episodes.

Much like the last couple of episodes, "Garden of Bones" is another fascinating look at the ever-evolving world of "Game of Thrones", with an ending that seems to overshadow almost everything else in the episode. As usual, I don't have knowledge of the books to compare with, but the manner in which each episode blends together a collection of events is consistently satisfying. The pacing feels about right, with each episode seemingly including some kind of major twist on the status quo for the following episode to explore. Anymore, it seems like there are very few shows on television that I fit into my "must watch immediately" category, but "Game of Thrones" does so effortlessly; an impressive feat for a show with such a perpetually grim, unforgiving narrative.